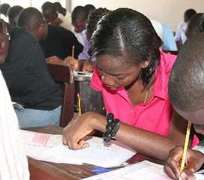 ABUJA, October 27, (THEWILL) - The Joint Admission and Matriculation Board (JAMB) Management and the management of Nigerian universities Wednesday disagreed over the legality of the post-Universal Tertiary Matriculation Examinations conducted by universities in Nigeria.

Both institutions held dissenting views that resulted to the pouring of invectives on each other at a Senate interactive session.

Former Minister of Education, who is a strong advocate of the post-UME examinations, Prof. Chinwe Obaji, appeared before the Senate Committee on Education investigating the legality of the test and pointedly declared that the failure of JAMB brought about the intervention.

Swiftly however, JAMB Registrar, Prof. Dibu Ojerinde, thundered that the conduct of the post-UTME was another matriculation examinations, which is contrary to the law establishing JAMB and creating additional financial burdens for students.

He said the Vice Chancellors had turned the test into a revenue generating funds, flouting the directives of the National Council on Education that no university should charge more than N1000 for the screening exercise.

“The results of the Post-UTME test are being used discriminatingly by different universities for different purposes, even as they invite candidates far more than their carrying capacities to boost their revenue from the exercise even when they know that they will not admit them,” he said.

But Prof. Obaii told the committee that she recommended post-JAMB test in 2005 for admitting students into the nation’s tertiary institutions after it was discovered that results obtained by JAMB candidates were fraudulent.

“What we found out was that there was no correlation between the JAMB scores obtained by students and their performances in class after they had been admitted. It was obvious at the time that JAMB was messing up the admissions with various kinds of lists,” she said.

She noted that after conducting post-JAMB in 2005, it was observed that the best candidates were selected while the number of successful candidates were not up to the carrying capacities of the universities in the country.

She said the post-JAMB test was a credible means of screening candidates and filtering candidates in the face of the limited capacity for admissions into tertiary institutions.

Prof. Obaje however admitted that the post-JAMB examinations had also been abused, but suggested that support should be given to the Vice Chancellors to be able to implement the guidelines to the letter.

She alleged that even at the states, Governors had taken over admissions in federal universities, making it difficult for people without connections to gain admissions.

Former Registrar of JAMB, Salim Bello, who was Registrar when the test was introduced, said there were more malpractices in the universities than outside them.

Although the committee was yet to reach its conclusions, its members were of the view that JAMB and the institutions should meet to fine tune ways of screening candidates for admissions with minimal cost to students.