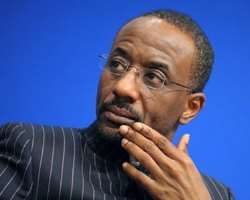 ABUJA, October 26, (THEWILL) - Central Bank of Nigeria (CBN) Governor, Mallam Sanusi Lamido Sanusi Wednesday begged the Senate to approve its request to increase the contribution of the federal government to the Asset Management Company of Nigeria [AMCON] to N500 billion.

Sanusi who responded to questions from Senators at an interactive session organized by the Senate Committee on Banking, Insurance and Other Financial Institutions also declared that he has no regrets in the ongoing banking reforms and protecting depositors.

He told senators that his job against the backdrop of the recent recapitalization in the banking sector is to protect depositors and not the Shareholders.

According to him, the CBN is not under any obligation to return anything to shareholders of failed banks, adding that he is glad that they are not happy with him. "I am happy that they are unhappy with me".

However, Lamido lamented that the bill which was forwarded to the parliament seeking to increase the amount for AMCON was thrown out by the House of Representatives.

He said, ‘’the CBN will contribute N500 billion according to the bill which is before the Senate. It is unfortunate that we could not meet with the House of Representatives before the amendment bill was thrown out. I appeal to you to take the amendment because we have an agreement with the banks. And many of them were not involved in the problem that led to the situation we see now. We are pleading that we have agreement and if we renege, it will not be good.

‘’It is my job to protect depositors. If you go and buy shares, you are taking a risk. The bank paid dividends, you took the dividends. Share price went up, you sold and tripled your money. Those that sold made money. Those that didn’t sell lost; it is a risk you took.

“I am serving depositors. Shareholders are not happy with me. I understand that and I accept it. I am happy that they are not happy because that means that I am doing my work,’’ Sanusi stated.

Lamido, who noted that Islamic banking is now a product globally, however reiterated that non-interest banking just introduced in the country is in the interest of the country and not a particular religion.

The chairman of the committee, Senator Ayo Adeseun while responding said that the essence of the interactive session was to enable them see that the banking sector remained focused.