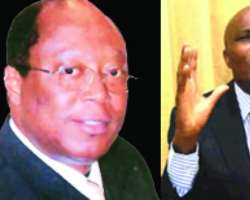 •Osunbor & •Imansuagbon
Prologue
Beginning from May 29, 1999, the Peoples Democratic Party (PDP) won almost 99% of the elective positions in Edo State with very feeble challenge from the then opposition - the All Peoples Party (now All Nigerian Peoples Party) and the Alliance for Democracy (AD).

As its popularity soared as the party of choice, contending interests within Edo PDP struggled for primacy over who should hold party, executive, legislative and appointive positions. Like all human aggregations, the struggles became an admixture of selflessness, guile, mutual distrust and uncontrollable bile.

While it is true that politics blossoms on competing interests, ideas and persons jostling for power, it is practically impossible to satisfy the aspirations of all party people in contention. It is even more difficult to do so in a popular and well-organised party like the PDP with a complement of educated, skilled, qualified and intelligent members who are competing for the limited elective and appointive positions at party, executive and legislative levels.

The application of party primaries (using either the direct or electoral college models) to elect candidates from the pool of qualified aspirants, has tended to be the most acceptable system of choosing candidates to both the aspirants and their supporters when set rules of due diligence are applied and seen to be implemented without bias or sentiment.

What went wrong
One of the key factors that nailed and rubbished Edo PDP's acclaimed cohesiveness at local and state elections and turned its fortunes into a near-interminable incubus, is the conduct (or misconduct) of acceptable primaries with discernable Rules of Engagement. The one for governorship conducted on Saturday, December 9, 2006 has been the first, and the last exercise of its sort that had indices and colorations of a party primaries.

Another factor had to do with the poor Performance Index of the partyman who held forte in Government House, Benin City between May 29, 1999 and May 29, 2007. It is instructive to note that this same person promoted and floated the present opposition party in the state with his supporters forming the power matrix of governance in the state.

A thin vinyl of political gossamer separates the operators of the present government in Edo State from the culpability which was perpetrated by their chief promoter in the eight years of inaction, rot and neglect.

PDP's vice-like hold on to power in Edo State, collapsed more out of 'friendly fires' than the political dexterity, acceptability and organisational ability of the opposition. Infact, the opposition is PDP.

The season of renaissance
Since the Court of Appeal judgment of November 11, 2008, committed partymen and women have done a lot of rapprochement and damage control across the political fault lines within the party structure to paper over the cracks and tinker a brand new PDP nurtured on the best practices of equity, fairplay and internal democratic values.

The gladiators
The main contenders competing for prominence at the forthcoming Edo PDP governorship primaries are (a) Professor (Senator) Oserheimen Aigberaodion Osunbor (b) Major - General Charles Ehigie Airhiavbere (retd) and (c) Barrister Kenneth Imansuagbon. The two names frequently showing on the political radar of Edo PDP are those of Senator Magnus Odion Ugbesia and Captain Hosa Okunbor. After persistent enquiries, it was discovered that Senator Ugbesia is engrossed in his current position as the Senator representing Edo Central at the National Assembly in Abuja while Captain Okunbor is believed to be apathetic to all pressures to join the governorship fray as he prefers to play a stabilizing role within the party.

Professor Oserheimen Osunbor: Professor Osunbor, emeritus Professor and Head of Department of Business Law (1990 to 1996) and Dean, Faculty of Law (1996 to 1999) at the Lagos State University, is an eminent practitioner of Law with emphasis on legal drafting and litigation since 1976.

He was twice Senator representing Edo Central Senatorial District from 1999 to 2007, Professor Osunbor was a delegate to the Constitutional Conference (1994 - 1995) and Chairman of its Sub-Committee on Population.

A pioneer member of the Peoples Democratic Party, he was elected the Governor of Edo State on April 14, 2007 and recorded ground-breaking achievements and strides before the Court of Appeal judgment of November 11, 2008 truncated his administration after barely 18 months in office.

A consummate administrator and stickler for efficiency, due diligence and corporate governance best practices, Professor Osunbor will be deploying his experience, academic excellence, national and international networks, and accumulated clout within and outside the PDP at the service of Edo State.

His undying resolve to foster and engender the prompt and equitable delivery of the fruits of good governance to all Edo people provided the litmus test for the optimum performance he displayed as the Governor of Edo State between May 29, 2007 and November 11, 2008.

(b)Major -General Charles Airhiavbere (retd): Maj-Gen. Airhiavbere is the immediate past Director of Army Firnance Corps and Directing Staff of National Institute of Policy and Strategic Studies Kuru, Jos, who retired from the Nigerian Army on July 11, 2011 to pursue his pet dream of becoming the next Governor of Edo State. Apart from his many decades stint in the military, not much is known about this military accountant except that he picked his PDP membership card from his ward in Benin City, the Edo State capital immediately after he was pulled out of the Army. It is believed that the overall campaign projections of his campaign outfit is built on a fulcrum of unlimited funding to garner a support base within the party. It is not known whether the support so gathered will last as past experiences have shown that the highest bidder is not always the victor .

Some political watchers in the state point to insinuations that the Airhiavbere foray into Edo State politics, just months after his retirement from the Army, may well be a carry over from the projections in certain quarters that the PDP in Edo State will only prosper if the Edo South Senatorial District produces the party candidate.

(b)Barrister Kenneth Imansuagbon: Barrister Kenneth Imansuagbon is a latter-day convert to the Peoples Democratic Party in Edo State. He was a foundation member / part-financier of the defunct Advanced Congress of Democrats (ACD), the precursor of the Action Congress (and now Action Congress of Nigeria). During the run-up to the 2007 elections, Barrister Imansuagbon was a frontline aspirant under the ACN until he was cleverly relegated further down in the perking order in that party's affairs.

He crossed over to the PDP in 2009 with a big baggage of angst and bile against the ACN - a party he spoon-fed with revenue from his flourishing educational institutions in Maryland, United States of America and Abuja, Nigeria.

Barrister Imansuagbon enters the governorship race of Edo PDP with the tag of an overtly ambitious youngman who has come into the PDP with the sole aim of using it as a veritable platform to get back at his ACN traducers and also achieve his aim of ruling Edo State, to boot.

Like Major-General Charles Ehigie Airhiavbere, Barrister Imansuagbon lacks the personal electoral platform, style and grassroots appeal to make meaningful impact on the forthcoming electoral contest. Rather the impetus has been built on large war chests.

To compound matters, the recent defection to the ACN of Barrister Henry Idahagbon, a former Commissioner in the Igbinedion Administration and ex-Chairman of Egor Local Government Council and lately the Director-General of Barrister Kenneth Imansuagbon Campaign Organisation, speaks volumes of the readiness and seriousness of the principal himself. It is believed by political observers that Idahagbon's decampment is a sad commentary by an insider who, before he voted with his feet, was privy to all the action plans, financial outlay and strategic roadmap of Imansuagbon in his avowed quest to wrest power from the ACN. Idahagbon defected from the Imansuagbon camp less than three months after he was appointed as the Director-General. It clearly indicates his assessment of Imansuagbon's aspiration as not worthwhile and sustainable.

Who holds all the aces?
By his orientation and disposition, Professor Osunbor represents that platform for the evolution of benevolent governance with human face, where the average Edolite will be at the centre-stage of government's policies, programmes and projects. With the prospect of not being subjected to dictatorial regimentation, serial violence, climate of insecurity and induced fear by a government that is supposed to champion and promote their happiness, Edolites roll gladly welcome an encore for Professor Osunbor.

Osunbor is primed and ready to provide that positive leadership that will free Edo State and its people from hollow and self-serving 'revolutionary' mantras and executive high handedness.

The forthcoming Edo PDP governorship primaries provides that rare opportunity to choose that party candidate that will bear the ensign of all well-meaning but cowed populace of Edo State in the July 14, 2012 governorship election in the state.

DR. OKHAKUMHE IJEBOR
A political commentator is based in Abuja