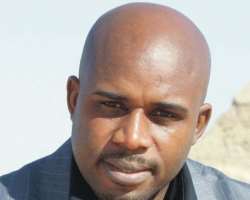 The crisis rocking Nollywood took a turn for the worse when some thugs invaded the National Arts Theatre, Iganmu, Lagos and inflicted machete cuts on some members of the Association of Movie Producers, (AMP) during their election screening exercise.

http://nollywoodgists.com gathered that the thugs at the weekend, invaded the venue with cutlasses, broken bottles and other dangerous weapons, pounced on supporters of a presidential aspirant, Teco Benson and beat some of them into coma.

It took the intervention 20 policemen from Iponri Police Division, who were drafted to the scene to prevent the attack from escalating.

Some of the AMP members battered by the hoodlums include AMA Award winning producer and director, Dickson Iroegbu, Madu Chikwendu, Alex Ehialu and Lilian Amah.

Iroegbu, who was said to have been beaten into coma, in a petition sent to the Nigerian Police, and other guilds of Nollywood, alleged that the thugs were hired by the incumbent President of AMP, Paul Obazele, who is afraid of losing the seat to Teco Benson.

Iroegbu, also alleged that Obazele has been threatening his life for sometime now. He called on Nigerians and authorities concerned to intervene in the matter.

Also speaking with P.M.News, the Financial Secretary of the association, Obi Madubogwu, alleged that “the thugs that unleashed the terror are not AMP members, but some miscreants hired by Paul Obazele. He did that because it was obvious to him that Teco was having the upper hand.”

When our reporter called Obazele on phone for his reaction, he denied having anything to do with the incident, adding, “I was not even at the National Theatre when the incident happened.”

In a related development, the Actors Guild of Nigeria (AGN), has suspended its former National President, Ejike Asiegbu, for what it termed anti-guild activities.

The decision to suspend Asiegbu was taken yesterday during the guild's meeting held at their secretariat on Ajao Road, Surulere.

When http://nollywoodgists.com called Ejike's MTN line at about 7:49 p.m. yesterday, he was said to be in a meeting. However, his Personal Assistant who answered the call swiftly reacted that “it is a fake information. Nobody can suspend Ejike.”