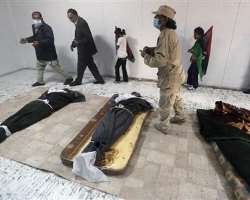 Muammar Gaddafi and his son Mo'tassim were buried in a secret desert location on Tuesday, five days after the deposed Libyan leader was captured, killed and put on grisly public display.

"He (Gaddafi) has just been buried now in the desert along with his son," National Transitional Council (NTC) commander Abdel Majid Mlegta told Reuters by telephone.

Gaddafi's cleric, Khaled Tantoush, who was captured with him, prayed over the rotting bodies before they were taken from the compound in the coastal city of Misrata, where they had been on show, and handed to two NTC loyalists for burial, he said.

The NTC had worried many outsiders by displaying the corpses in a meat locker in the fiercely anti-Gaddafi city of Misrata until their decaying state forced them on Monday to call a halt.

Under pressure from Western allies, the NTC promised the same day to investigate how Gaddafi and his son were killed. Mobile phone footage shows both alive after their capture. The former leader was seen being mocked, beaten and abused before he died, in what NTC officials say was crossfire.

The saga has made Western allies of Libya's interim leadership queasy about the prospects for the rule of law and stable government in the post-Gaddafi era.

"I laughed when I saw him being beaten as he deserved to be. And I laugh again now that I know he is in the ground," said Emani Zaid, 20, a student in Tripoli. "If the men who buried him are true free Libyans, they can keep the secret (of his grave)."

Determined to prevent Gaddafi's grave from becoming a shrine for his supporters, the NTC wants to keep its location secret, refusing custody to his tribe, many of whom live in Sirte.

The prayers for the dead were attended by two of Gaddafi's cousins, Mansour Dhao Ibrahim, once leader of the feared People's Guard, and Ahmed Ibrahim. Both were captured with him after a NATO air strike hit a convoy of vehicles trying to break out of Sirte, Gaddafi's home town, just after it fell.

"The NTC officials were handed the body after the sheikh completed the early morning ceremony and are taking him somewhere very far away into the desert," Mlegta said.

"THROW HIM IN A HOLE"
For Ali Azzarog, 47, an engineer, it was good riddance.

"Throw him in a hole, in the sea, in garbage. No matter. He is lower than a donkey or a dog and only foreigners say they care about how we killed him. And they are lying," he said.

Mohammed al-Sharif, a 22-year-old describing himself as an aspiring writer, said: "Let the dust of the desert sweep over the hole where he was buried ... Then the name 'Muammar' can be forgotten and our children will never know of this time."

Libyans rose up against Gaddafi's 42-year rule in February, defying a violent response that was parried by NATO air power under a United Nations mandate to protect civilians.

The 69-year-old strongman's death ended eight months of war that had dragged on in Sirte and elsewhere even after the NTC's ragtag militias captured the capital, Tripoli, in August.

Hatred of Gaddafi unified his disparate opponents, who may now tussle for power during a planned transition to democracy in a broken nation with regional and tribal rivalries to overcome.

"Leaders from different regions, cities, want to negotiate over everything -- posts in government, budgets for cities, dissolving militias," said one senior NTC official in Tripoli, though he defended this as a healthy expression of freedom.

At times, Gaddafi's body appeared to have become a macabre bargaining chip for Misrata, which endured a pitiless war-time siege, and whose leaders now demand a big say in the new Libya.

Fears that Gaddafi's sons might wage an Iraq-style insurgency have faded since the deaths of Mo'tassim and his brother Khamis, a military commander, who was killed earlier.

But well-armed fighters in the former Gaddafi stronghold of Bani Walid, which fell to the NTC this month, told Reuters they were planning to keep up their struggle.

"MASS EXECUTION"
Abuses apparently committed by both sides in the civil war may also impede reconciliation. New York-based Human Rights Watch urged the NTC on Monday to probe an "apparent mass execution" of 53 people, apparently Gaddafi loyalists, whom it found dead, some with their hands bound, at a Sirte hotel.

In Tripoli, a 33-year-old waiter, who said he was too scared to give his name, praised what he said was Gaddafi's courage.

"If you say Gaddafi died like a coward, you are wrong. He died proud like a lion. He said he would never leave Libya and he did not leave. Fight, fight, fight. I was not a Gaddafi supporter before this revolution but when I saw his bravery, I knew he was the only man for Libya," he said.

One of Gaddafi's sons, the enigmatic Saif al-Islam, remains on the run. Once viewed as a moderate reformer, Saif vowed to help his father crush his enemies once the revolt began.

An NTC official said Saif al-Islam was in the remote southern desert near Niger and Algeria and was set to flee Libya using a false passport.

He said Gaddafi's former intelligence chief Abdullah al-Senussi who, like Saif al-Islam, is wanted by the International Criminal Court, was involved in the escape plan.

"The region is very difficult to monitor and encircle," the official said of Saif al-Islam's purported whereabouts.

In Niger, there was no official comment on Saif al-Islam, but the government there has repeatedly signalled it would fulfil its responsibilities to the International Criminal Court which wants to try Gaddafi's son for crimes against humanity.

"The instructions in Niger are very clear: if this son of Gaddafi enters Niger, he must be arrested and placed immediately in the hands of the authorities because there is an international arrest warrant for him," a Nigerien military source said.

Gaddafi's death allowed the NTC to declare Libya's "liberation" on Sunday in Benghazi, the seat of the revolt.

Many rejoicing Libyans brushed off unease among human rights groups and Western capitals about the manner of Gaddafi's death.

Until the public was finally denied access on Monday, fighters were still ushering sightseers into the chilled room where the bodies of Gaddafi, Mo'tassim and his former army chief lay, their flesh darkening and leaking fluids.

The U.N. human rights arm has joined the Gaddafi family in seeking an inquiry into his killing. The NTC promised one on Monday, saying most Libyans had hoped to see Gaddafi on trial.

Some Libyans are also uncomfortable at the way Gaddafi was killed and his body treated.

"I regret it, really," said lawyer Sawani Ghanem, 30, adding that Gaddafi had tainted Libya as a land of terrorists. "We should have tried to show the world we could be more humane and aspire to change."