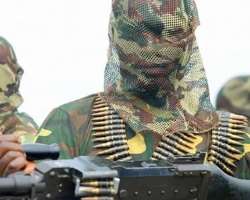 A Nigerian Islamist sect said it killed a state television cameraman because it had evidence that he was an informant for the security services, and the group warned it would kill anyone else who "steps on our toes".

Alhaji Zakariya Isa, a journalist working for the government-owned Nigerian Television Authority, was killed on Saturday by gunmen who attacked him at his home in Maiduguri, the capital of Borno state, in the far northeast where Africa's most populous nation borders Cameroon, Niger and Chad.

Boko Haram, whose name means "Western education is forbidden", has been behind dozens of shootings in Nigeria's northeast this year, usually targeting authority and religious figures.

This is the first journalist to have been slain by the sect, although it has warned reporters not to misquote Boko Haram.

"Zakariya was killed because he was an informant of security agencies ... He gave information to security agents that led to the arrest of many of our members. We killed him not because he was a journalist but because of his personal misconduct, which was against the ethics of his profession," said a statement from Abu Qaqa, a spokesman for Boko Haram.

"We have no grudge against journalists that are working in line with the professional provisions of their work. Whenever they misquote or misrepresent our position we normally call them and tell them to correct the error.

"(We) will not hesitate to kill anybody who steps on our toes."

The State Security Service declined to comment on whether Isa was an informant.

Boko Haram is growing in ambition and sophistication. Both international and Nigerian security agencies believe it has been strengthening ties with al Qaeda's north African wing.

It took responsibility for a car bomb outside Abuja police headquarters in June before carrying out Nigeria's first known suicide bomb in August, when a car full of explosives was smashed into the side of the U.N. headquarters in the capital, tearing off part of the building and killing 24 people.