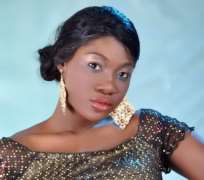 Insiders say the couple after the horrendous media trial that trailed their wedding following the emergence of one Lovely Okojie who claimed to have been married to Prince Okojie,have decided to live their lives outside the media.

Mercy we hear,no longer speaks to the media and refers everyone who calls her for an interview,to contact her husband.Again,she has also shunned events where she cannot attend with her husband.

Since returning from her three legged honeymoon late last month,Mercy has settled down into her marriage and attends functions strictly with her husband.

A few days after their return from honeymoon,the couple was feted by the Speaker of the Edo State House of Assembly and others who are friends of Prince Odi in Benin City.It was from there that the couple flew to Abuja to attend the opening ceremony of Chika Ike's boutique,Fancy Nancy.

One thing most people don't know,is that contrary to the belief that marriage will slow down the demand for Mercy Johnson in Nollywood,producers have actually opened a mad race to get her in their movies.

This development,has seen Mercy shuttling between Lagos and Asaba on a weekly basis,to attend to the numerous film roles that she has been contracted to do after her marriage.