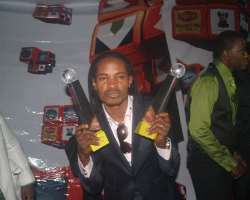 The Soundcity Music Video Awards (SMVA 2009), drew a bigger crowd than many had expected. Musicians, actors, TV presenters and other celebrities besieged Oceanview, Victoria Island, Lagos on Saturday, August 1 for the event. So was Klieglights.

Members of the Mo'Hits crew were so happy at the SMVA 2009 they couldn't help but sing the praises of Don Jazzy, who is the head of the clique when he was dubbed the 2009 hip producer. Don Jazzy, who had stiff competition from ID Cabasa and Terry G, was all smiles and didn't even say a word as D'banj noted that the award was long deserved. The dude, who got some knocks from the host of the awards ceremony, Dare Art Alade, had fun sipping Roseate drink with his partner, D'banj.

To say that Wande Coal is on fire is not totally an overstatement going by the response of fans to his performances since the release of his debut album, Mushin to Mohits. His performance at the SMVA 2009 got guests up on their feet to tracks like 'U Bad' and 'Bumper2Bumper.' As if giving him a standing ovation wasn't enough, the guests took to the dance floor and mimed along with the dark-skinned dude before he was joined by D'banj on the stage.

The Lagos State Deputy Governor, Mrs. Sarah Sosan, proved to be a supporter of the good cause as she graced the SMVA 2009 and participated fully. The radiant and fashionable lady was one of the top dignitaries, who couldn't help but dance her heart out to the tunes of Wande Coal. Though she came a little late for the event, the awards ceremony was kick-started shortly after her arrival. She ably represented the Lagos State Government, one of the sponsors of the event.

Kelechi Ohia, who is well known as Kel, was not only happy but overwhelmed, after she was announced the winner of the Soundcity Discovery of the Year award. So happy was she that she stuttered when asked to give a speech. She was saved by her crew and manager, who was handy to thank those that mattered as she left the stage bewildered.

One thing that almost marred the SMVA 2009 was the uncontrolled crowd. In spite of the huge security provided by K2 Security, the guests had trouble gaining entrance into the venue. The crowd in the Soundcity Event Centre did not provide a conducive environment and better viewing for several guests, who were specially invited by Tajudeen Adepetu.

Many guests were on their feet and blocked the view of several others, who were seated. What further marred the event was the indistinct vision, which the big screen provided all through the event.

As the tradition has become since inception, the SMVA 2009 had an American hip-hop artiste. This year it was MIMS. The dude, who is responsible for the hit track, 'This Is Why I'm Hot,' was at his best as he performed some of his songs to the Nigerian audience. MIMS wrapped up the event as guests started trooping out of the venue after his performances that started around 2:30 a.m. in the wee hours of August 2.

Without doubt, Tajudeen Adepetu, the man behind Consolidated Media - producer of Soundcity TV and Soundcity Music Video Awards - is a good host. Though it would have been better if all logistics and distractions at the award ceremony had been properly put in place, the fact remains, he is a good host. Quite amiable, he patiently watched the ceremony till after MIMS' performance before he took a break to get fresh air on the red carpet. With a well-lettered invite, which was directly addressed to every guest by Tajudeen himself, many felt more at home with the good-looking entertainment entrepreneur.

Returning from a trip to South Africa cut short by high hopes, Bigiano was not disappointed as his efforts was rewarded with two awards. The dude, who topped the nomination list, was rewarded with the Choice Awards and Award for Best Cinematography. So happy was the gangling musician that he and his crew stormed the stage with a bottle of Hennessey. He smiled home celebrating his birthday with the two awards.