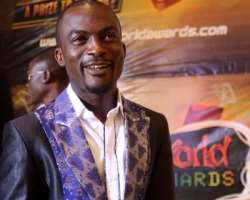 One of the nominees at the last week held SoundCity Music Video Awards was robbed by 'security operatives' clad in police jackets on the Ikorodu road on his way back from the ceremony.

The incident which took place at about 1am further evidences the risk involved with driving on the Lagos roads especially at night.

Perhaps, impostors, the six-man gang had flashed down Lord of Ajasa with a torch and asked him to pull over, only to be dispossessed of belongings including cash, phones and jewellery. The Yoruba rap act was driving in a blue Honda Bullet in company of his personal assistant, Kunle, and friend, Timothy (who was driving), when the unfortunate incident happened.

Narrating his ordeal, the bitter rapper said, 'they were wearing the police jacket with 'Police' written on it. So, I decided to slow down on the highway and eventually stopped. Ordinarily, I wouldn't have stopped if not for the police jacket I saw.

Before I could say jack, they ordered us out of the vehicle and ransacked our pockets and the car for anything valuable.

It looked like a film trick. My friend who drove was even trying to explain that I am an artiste and all of that but when they landed him a slap on the face, we knew we were in for it.”

Not even Ajasa's wedding band was spared in the raid. The rapper got married to his erstwhile love, Funmi, less than a year ago and the couple is blessed with a son.