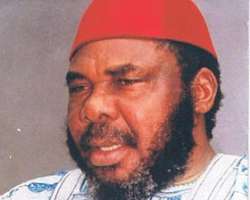 In a statement issue by AGN caretaker committee's chairman, Mr. Kanayo .O. Kanayo, (KOK), through Mr. Stanley Okoronkwo, media consultant to the guild, stated that “after broad consultation with members and stakeholders, we are pleased to inform you that Chief Pete Edochie has been appointed Chairman of the electoral committee saddled with the duty and responsibility to midwife a credible and transparent election for the Actors Guild of Nigeria.

Also K.O.K stated that “various committees have also been set up to help put the guild back on track while a 20-man task force team headed by Emeka Rising Ibe has been put in place.”

It will be recalled that the KOK- led committee released the electoral time table last week. The time table, which commenced on July 3,1 is expected to usher in a new elected president by January 20, 2010.

Before now, board of trustees of the guild, in its bid to end the protracted crisis that has engulfed the AGN had obtained a restraining order from a Lagos High Court, stating, among other things, that the defendant (Ejike Asiegbu) and members of his former executives, are restrained from operating any of the guild's accounts.” The order was signed by the presiding judge, Justice A.O. Ajakaiye