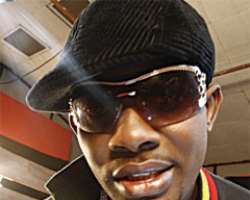 He started producing other peoples' songs about a decade ago. Then he was in the Eastern part of the country. His first attempt at releasing his own song was with a track titled,'So Fly' but it didn't quite fly. His second single worked the magic and instantly registered him on our minds.

Today, 'Good or Bad,' is almost a national anthem with the catchy hook, an unusual refrain and tempting beat. The soft-spoken Abia beatmaker has his beat and voice trademark on Bracket's 'Ada Owerri' which is soaring right now. A close friend to the Okoyes, this dude describes the journey this far.

Jay martins
My name is J. Martins and J stands for Justice.

J. Martins is a songwriter, artiste and song producer. I'm the quiet type which means I could be a bit laid back. I'm not the talking type but then I associate. I'm from Abia state.
You say you've been around for a while.

Definitely,people know me more in the production line. It's the side that you open to people that they get to know. So, a lot know the production side before the artiste side.

How long have you been involved in song production?

Over a decade now. It's not everything you talk about. That I didn't make statements there doesn't mean I've not been there. I've just been trying to find the right time to strike a point. When the time was right,I worked hard and God honoured it.

Why did you decide to sing a song of your own?

It was not an overnight decision. It was just time.

Let's talk about 'Good or bad'.

'Good or bad' is the second single from the album ,'Get Serious'. The first single was 'So Fly'. It's my first album and we're talking about an album that sold nothing less than three million. It came out on the 5th of September and six weeks from that day, it crossed over a million copies.

Did you write the song yourself?

Not just me, a couple of people. I, Timmaya, P-Square and Jude Okoye. It was the coming together of different people with different ideas.

How did you come about the song?

The beat first came, then the hook, verses and the different ideas. The beat actually had a song before which is definitely going to be Good or Bad Part 2 for sometime next year. But then I just felt, let me keep that and use the beat to work on something else whereby I can call in my friends.

It was Peter who first discovered the song when I came back, but from the beat, it was Jude. Then the song came and it was Peter and Paul. At first, we were looking at a 50:50 chance but Peter was more assertive..

While you were cooking all of these together, did you think it was going to blow up?

Of course, I knew and not about thinking. I wasn't taken by surprise.

The truth about songs is that if you get it, you know you have it. The bottom line of success of any song is not necessarily the song itself or the people on the song. The most important thing about it (my own project) is that God personally blessed it. Its not an easy thing to achieve in Nigeria where there are over a million studios with people recording day in, day out.

How do you know a song that has the potentials of scoring a hit?

Basically, from the beat first. When you make a great beat, you know. Like one of my friends, Peter of P-Square will say : If you've got the beat right, the next thing is the lyrics. And once you've got a good hook, you've got it all.

These things are gifts and talents and you don't buy them. If you don't have them, you don't. That's why I also like the courage of those that can't write and admit that they can't and so they always walk around people that they know can. And it works for them.

Why do some good songs not get to be popular even though they are played on radio?

Why did you decide to feature the people you did in 'Good or Bad'?

One thing about collabos that people need to understand is that it's not every song that goes with every kind of artiste.

How beneficial is your experience in song production to recording as an artiste?

It has helped in a way but at the same time it may not really be the best because you can be wrong too. There are times that you don't really expect much from a song and it ends up surprising you.

First it started as work relationship but from there it went on to brothers and now friendship. It's a relationship in which our work pays us. We are no more after 'pay me for the job I did for you'.

Quick Bits
* Rapper Bukola was at the Silverbird Galleria, Victoria Island, on Thursday signing autographs for fans.
* Activities indicating the take-off of the Nigeria Music Video Awards (NMVA) '09 will begin with a press conference at the Eko Hotel banquet next Tuesday.

*Gospel singer Lara George will officially unveil her new album in about two weeks from now. Her new Gbenga Salau directed video, 'Run With me' is streamed on line. The video features Yoruba rap act 'Lord of Ajasa'.