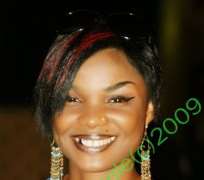 'Double-colors skinned' actress, Iyabo Ojo is one actress that has become so controversial lately ever since the rumour of her marriage to a certain Tunde broke. And a lot of her colleagues are keeping their distance, we learnt, due to her bad character she always displays whenever a serious argument occurs.

One of her many bad sides, we were reliably informed, came to fore penultimate Sunday, precisely July 26, day of joy in the memoirs of Tayo Odueke popularly called Sikiratu Sidondo in the movie world. Iyabo was said to have stormed the place and when she was about to settle down, another actress, Lizzy Anjorin, took on her and a they both engaged in a free for all fight, we learnt.

The show of shame that tangled the two Nollywood actresses was regarded dirty and uncalled for as they turned the venue of the movie premier to battle field where scores must be settled. The petit lady, having fully satisfied with the treatment given to the mother of one, Iyabo Ojo, she explained that, she needed to deal with her because it's a sheer case of 'if you do me I do you'.

“We met at a party recently and Iyabo whom I so much respected in the industry embarrassed me on the grounds that I don't accord her due respect. Everybody present here today will testify to this that I haven't disrespected her in any form. Though, I didn't react violently that day she embarrased me, I left to fight another day. So, seeing her here today, I just decided to vent my anger on her.” She concluded.