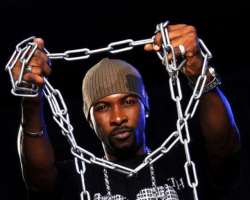 Penultimate week when Ruggedy Baba as Michael a.k.a Ruggedman is fondly called mounted the stage at Oniru Private Beach in Lekki serviced by the billionaire property merchant Fatai Animashaun, Fat Anny, to do what he knows how to do best-Music, he never envisaged the embarrassment he got from the very large crowd.

When Ruddeman got to the stage, from nowhere, an unidentified person threw a sachet of dirty water to him on stage. The attack which infuriated Michael, we learnt led him to stop the show as he was raining curses on the unknown culprit.

According to an eye witness account, Ruggedy's appearance on stage only received an average ovation due to the fact that Mode 9, who has been rivalry with the Abia State born rapper, Ruggedy Baba had the largest fans at the place. Bad belle people have even fingered Mode 9 and his cohorts in the 'dirty water saga'. Could that be true? We shall keep you posted