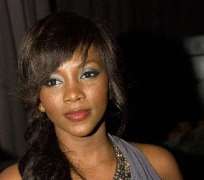 Genevieve Nnaji is one Nollywood actresses that has through her talent become one of Nigeria and Africa's prides. Coming through into the play-acting world at the early age of eight, when she acted in a TV soap, Ripples, Genny, as she is fondly called, has grown to be one of the best in the business.

Not too long ago, this make-believe goddess lost a movie role to Hollywood actress, Naomi Harris, in a movie titled, Bond Girl. This move was seen as a step forward in our actors breaking into Nollywood.

Just after the news of the lost movie role broke in Nigeria, there was another news that she has been slated to star alongside top Hollywood dive, Angelina Jolie. As usual, this was greeted among Nigerians as good news.

But recently, when the Queen of the Nollywood industry in Nigeria, Genny, was asked what the movie title would be and also when she would be on set for the movie, she simply answered, 'there is no movie role with Jolie, my dear.'

For those who have been waiting to see Genny acting alongside Jolie, a former world's sexiest woman, maybe they would have to wait for another real opportunity to come her way. But for now, Genny has debunks such rumour.