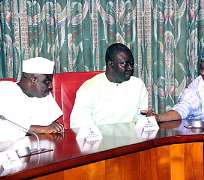 The President made the announcement at the inauguration of a committee on the composition of boards of federal government parastatals in Abuja. The board is chaired by the Vice President, Arch. Namadi Sambo.

THEWILL can report that the dissolution of the boards which the President described as a tradition which occurs every four years after general elections is expected to pave way for the reward of party loyalists.

Members of the committee charged with constituting appointments into the dissolved boards include Senate President David Mark, who was represented at the ceremony by Deputy Senate President Ike Ekweremadu, Speaker House of the Representatives Aminu Tambuwal, National Chairman of the Peoples Democratic Party (PDP) Abubakar Baraje and the Secretary to Government of the Federation Anyim Pius Anyim, who will be secretary of the committee.

“It is customary that at the end of every four years, the boards of Federal Government parastatal, agencies are dissolved. The dissolution would have been done earlier but of course this is a continuous government. That is why we were not in a hurry to dissolve the boards. I use this opportunity to thank the chairmen and members of the various boards that have served this country very well,” Jonathan said.