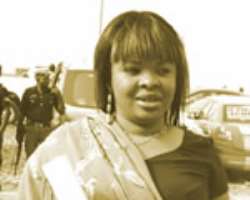 We were told the two actresses are allegedly in a cold war over a guy simply known as Kolawole.

According to information pieced together by us,Bimbo allegedly met Kola a couple of years back,though they were friends.

Inside sources alleged that what was between them was more than casual friendship.Dayo on the other hand,allegedly met Kola at a friends birthday party in 2010.They were introduced to each other by the celebrant and the two allegedly kicked off their friendship from there.

Things reportedly fell apart when Dayo saw Kola's picture on Bimbo's phone.Thinking she was dating Kola,the two talented actresses had a hot argument which resulted to a rain of abusive words.Thereafter,the twosome went their separate ways.

Effort made by some actresses to settle the feud between Dayo and Bimbo remained futile.

Dayo Amusa also debunked the rumor making the rounds,she said; That is a big lie.Myself and Bimbo never fought,we didn't fight over any London lover.The two of us are even on the same location.