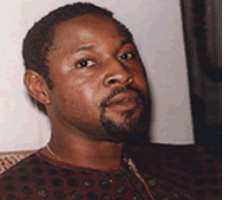 Ace actor Saheed Balogun recently returned from South Africa where he had gone to shoot a movie. Hardly had he touched down in Nigeria when he embarked on another movie project again with some less privileged. With the rate this father of three is going, he might be the busiest producer and director in Nollywood.

Saheed, whose quest for history led him to produce the first two and three cast movies in Africa is joining hands with Haven for African Child Foundation (The Haven) to produce a movie that will sensitise the general public to the plight of neglected children in the society.

It is a movie project similar to Tochi, the South African movie that won the Oscar award. Though, this might not another Tochi, it promises to wipe the same sentiment the Oscar movie did.
Founder of The Haven, Mrs. Oluyemisi Wada explained: "A street child is a child for whom the street, more than his or her family has become a real home. This child may not necessarily be homeless or without a family, but lived in a situation of some form of abuse, where there is no protection, love, supervision or expectation from responsible adults"

"At The Haven", she says, "we try to raise awareness about the plight of these children, we lobby the government, corporations and private individuals on their behalf, and some of the responses we've gotten are quite encouraging. The chef of an upscale restaurant here in Lagos has agreed to take care one of the Kuramo boys (as we call them) Daniel. He's training him to be a chef. A generous donor has sent another child to a boarding school, and the popular musician, Sound Sultan is currently in the studio with a former street child, Jamiu, recording a single. In the meantime, we have rented a room for three of the older boys, and paid for apprentices in furniture making, painting and barbing"
The movie, which will be titled 'The Haven' will feature over 14 kids, all from less privileged background and Saheed is taking a bold step by featuring two of his own children in the movie.
Shooting commenced on Sunday and will drag till the tail end of the week.

Oba Asa2: How far should a woman go in the quest for money and power?
This is the story of a young ladies' cult called Asa where members go beyond the boundaries of norm and sanity in their quest for wealth and influence. And to be the king of Asa, one's level of wealth and power must be unequalled. Lola Alao known as I-Jay is the newly crowned queen and she proves to all and sundry that she is not in the small fries' league. Of course, she has opposition and rivals who go as far as trying to unseat her with diabolical means. But to the dismay of all, she survives the antics but not without a repercussion. But the other girls are not so lucky.

The major characters are Mide Martins (Kike) who dupes her father and blackmails him because of his illicit affairs with one of her friends. The father disowns her in his will and she loses out finally when the house she built was demolished.
Mercy Aigbe is another character. Her role as Kabira (Jaiye) has many twists. She is the sweet girl from a good home who becomes a whore and engages in illicit affairs with her sister's husband, Saheed Balogun. The affair results in an outbreak of leprosy on her and it takes a spiritual rite by her sister, Ope Ayeola (Kausara) for her to get back on her feet.

Saheed Balogun is the husband who eats the forbidden fruit when he slept with his sister in law. He flees to Europe and America to escape shame when an herbalist prescribes that the antidote to Kausara's leprosy is for him to sleep with her in the presence of other family relatives and his wife. He meets with unprecedented shame in America and runs back home seeking forgiveness.
In all, Saidi has proven one more time that he knows his onions as a movie producer. The movie parades over 50 A-list stars like Antar Laniyan, Rachael Oniga, Ope Ayeola, Ope Adesanya, Baba Wande and a host of other stars. The acting delivery was superb. Mercy Aigbe, Ope Ayeola, Ronke Oshodi Oke and Mide Martins gave a good account of their talents, with Mercy proving that her winning City People's Best Yoruba Actress award was not a fluke.

The story line, though not particularly new is well told. Balogun displays creativity dexterity by telling an old story in a new way.
The costumes are good and in tune with both the plot and setting.
Foluke Daramola and Ope Adesanya may be new on the block as directors but they delivered. Balogun may have broken new grounds here too.

As good as language delivery is, there are some grey areas. For instance, where Ogogo and Foluke Daramola have to deliberate on taking Ronke Ojo to another hospital is drab and Lola Alao is unconvincing with her lines. The part where she had to turn one of the girls to a bird also leaves plenty of room for improvement. She seems to have either forgotten her lines or lost the passion to deliver them, or both.

Again, the part where the calabash, which Ope is to carry for Mercy's healing, disappears is not creative enough. If we have to give this movie a pass mark, Balogun's cast and crew would score 50%, and that's being generous.