Imoke Solicits The Services Of Nigerians In Diaspora 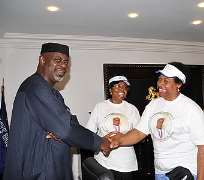 CALBAR, October 18, (THEWILL) - Governor Liyel Imoke of Cross River State says there is need for Nigerians in the Diaspora to make available their acquired professional expertise and experience to the development of the country.


Speaking while receiving the Diaspora Medical Mission led by Dr. Felicia Bassey Akamune during a courtesy call in Calabar, Governor Imoke averred that they should keep tap with the level of development in the state and as such look for opportunities where they can collaborate with government, saying that their contributions will greatly be appreciated in rural areas as every body wants to work in urban areas.


The Governor disclosed that the state has made tremendous effort especially in the area of primary health care with the view of understanding the need of the vulnerable in the society which is a diversion from the past, disclosing that the state has initiated a free health care programme for pregnant women and children under five years which is supported with a social welfare scheme for the benefits of the poor while there has been other programmes concerning provision of potable water across the state.


He attributed the low performance recorded in the health programme to the challenges of management and said efforts are at hand to address with the introduction of courses in health management in CRUTECH and UNICAL to ensure the successful implementation of primary and secondary health care schemes, stating that efforts have been completed to establish a model hospital in the state to be managed and run by trained professionals


According to him, the administration of the hospital will be restricted for those professionally trained to do so as government is committed to run it “in not a typical Nigerian Story but in a cleaner, better and more efficient environment.”


Governor Imoke said he would want both the Diaspora Medical Mission and Nigerians in Diaspora to participate in the expected Diaspora Conference to enable them make enormous contributions as well as provide them opportunity to see how they could be brought home to contribute their quota to the development of the state.


Earlier, the leader of the Diaspora Medical Mission, Dr. Felicia Bassey-Akamune, said they were in the state in liaison of the State Ministry of Health to undertake some free health services especially in the rural areas, adding that they were committed and excited to work the state government.


A member of the team, Dr. Tony Henshaw, an indigene of the state who was visiting the state after 30 years, noted that a collaboration between the duo would hasten the impact of professionalism in the health section and thanked the state government for giving them the opportunity to serve the people while commending the state government for embarking on infrastructural development there by making Cross River most beautiful and most preferred state in the country.


Dr. Ify Nwabukwu, a specialist in breast cancer, said the ailment affects women all lover the world and as such there was need to empower women how to detect it at a very early stage, disclosing that her team had met a couple of young girls and taught them about cancer.


According to Dr. Nwabukwu, the young girls are expected to teach others especially the order ones because of the devastating effect of the ailment while commending heath officers in the state, especially the Commissioner for Heath Dr. Edet Ikpi, for doing a good work.