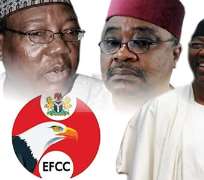 Two of the three men, Mr. Daniel and Mr. Alao-Akala, made court appearances to face multiple counts of money laundering and embezzlement. In a country where shame still has some purchase, a man accused of unconscionable theft would wear an expression indicating his recognition of the gravity of his alleged office. Even if falsely accused, such a man would comport himself in a manner that leaves nobody in doubt that he takes the charges seriously.

Not, alas, the former governors of Ogun and Oyo. Both Daniel and Alao-Akala arrived at the respective venues of their trial with the swagger and strut of candidates for induction into rolls of honor. Each brought a retinue of idolizing cheerleaders. Sporting flowing white agbada, they smiled and laughed and pumped fists and shook hands and waved to ecstatic supporters.

If anything, the body language of the two accused men left the impression that they mistook their trials for political rallies. Scratch that: it was as if they were stars at a political carnival, mobbed by adoring fans out to shower them with gratitude for peerless service. The atmosphere was nothing if not exuberant. It was the Bode George syndrome on steroids. Three years ago, Mr. George, a former military governor and confidant of former President Olusegun Obasanjo, was docked on charges of mismanaging billions of naira during his tenure as chairman of the board of the Nigerian Ports Authority.

As if determined to mock his trial, turning its solemn proceeding into an occasion for fashion and entertainment, Mr. George arrived at each court session with his posse of supporters, most of them elegant women who spotted matching dresses and expensive paraphernalia. Unimpressed by the fashion extravaganza, the judge found Bode George guilty and sent him – and his co-accused – straight to jail.

If Bode George’s fashion parades did not sway his judge, why are Daniel and Alao-Akala plying the same route? Why did they act as if they were in court to be decorated with medals for exemplary public service? Do they see themselves as heroic and populist who are being unfairly persecuted for championing the cause of the downtrodden?

Far from it! Nigerian prosecutors want both men to account for billions of naira they reportedly pocketed through fraudulent means and in illicit schemes. In other words, the EFCC has set itself the task of proving that Daniel and Alao-Akala are crooks, pure and simple. Should the commission’s case hold up in court, the two ex-governors are bound to earn spots in the nation’s public ledger as “His Excellency, the Executive Embezzler.”

In fact, if the anti-corruption agency persuades the trial judges that the accused are guilty, then the two former governors face the prospect of several years in jail – in addition to stiff fines. Why would a man in such potential jeopardy trivialize his trial by behaving as if he were the chief celebrant at an owambe outing, complete with praise singers?

One answer, of course, is that the two ex-governors know what the rest of us don’t know: that their trial is a ruse, a ploy, a gimmick designed to titillate the Nigerian public and to maintain the fiction – with the international community – that Nigeria takes seriously the war against corruption.

Heck, it’s actually not true that the rest of us don’t know it. Certainly, Nigerians have seen little or no reason to believe that the apparatus of law enforcement and the machinery of justice mean business when it comes to combating corruption. There’s much anecdotal evidence to support the perception that anybody with loads of cash can buy his way around the Nigerian police. Besides, Nigeria has been terribly unlucky in several of its attorney generals. Often, it’s as if the occupants of that hallowed office see their primary duty to be the protection of the worst of plunderers.

Think about it: Nigeria has been the stage for a series of national and international scandals, but without a single Nigerian official being held to account. There’s the whole question of what happened to billions of dollars that Nigeria reportedly earned during the first Gulf War, when retired General Ibrahim Babangida was running the country. The late economist, Pius Okigbo, investigated the matter, but nobody knows where his report can be found.

There was the Pentascope scheme, in which – by some account – Nigeria lost more than N100 billion. The National Assembly made moves to probe the scandal, but the whole affair soon fizzled into nothingness.

Thanks to the feud between former President Olusegun Obasanjo and his deputy, Atiku Abubakar, we learned about the questionable ways that the cash in our country’s Petroleum Trust Fund was disbursed. Neither man was seriously questioned on the matter.

There was the Siemens bribe scheme. In late 2008, officials of the Germany-based engineering giant agreed to pay a record-setting fine of $1.6 billion to the German and US governments to settle an investigation into the company’s practice of paying bribes in exchange for contracts in several countries, including Nigeria. Then Nigerian ruler Umaru Yar’Adua vowed to find and prosecute any Nigerian official who accepted the inducement. Till date, not a single Nigerian official has been indicted.

Then, there was the mother of recent scandals: Halliburton. It involved an extensive bribe scheme in which executives of Halliburton, a company once headed by former US Vice President Dick Cheney, confessed to bribing several top Nigerian officials in order to secure huge liquefied natural gas contracts. In March 2009, the office of then attorney general Michael Aondoakaa stated that Nigeria had sent an official request to the US government for the names of Nigerian beneficiaries of the bribes. You guessed right: That statement was as far as Nigeria ever went before the whole story disappeared from the pages of newspapers – and Nigerians were lulled to forgetfulness.

Incidents of proven or alleged betrayal of the public trust have since lost their capacity to shock Nigerians. It’s conventional wisdom in Nigeria that most, if not all, public officials – both in elective as well as appointive posts – help themselves liberally to public funds. What’s even worse is that many Nigerians have become so jaded that they openly defend deplorable and brazen acts of corruption. On blogs and other Internet forums, some contributors invest energy inventing all kinds of justifications – or excuses – for public officials (among them, presidents, governors, ministers, legislators, local government councilors) who loot public treasuries.

Many Nigerians would often garland the necks of pickpockets with tires, douse them in fuel, and set them on fire. But some of the same merciless Nigerians would argue that politicians who pocket billions of naira in stolen funds must be accorded respect due the office they hold. Some Nigerians would not insist that occupants of exalted public office must conduct themselves nobly. Yet, when a public official is called by the proper name earned by his or her ignoble conduct – for example, for stealing – some misguided apologists rush forward to demand that the office itself guarantees its occupant some form of beatification.

President Barack Obama earns $400,000 per annum. Even his most inveterate critics would agree that the man works hard for every dollar he’s paid. Amazingly, no Nigerian governor – and few of Nigeria’s local government chairmen – would agree to swap salaries with Mr. Obama. Why is that so? For one, because most Nigerian governors collect N300 million or more each month – more than $2 million – in an entrenched scam called security vote. Each month, then, many a Nigerian governor pockets enough cash to pay Mr. Obama’s annual salary four or five times over!

For that matter, every three months, members of Nigeria’s legislature collect enough cash in “constituency allowances” to pay the US president’s salary three times over. Yet, with the exception of a handful of public officials, it is difficult to make the case that Nigerian leaders work hard.

But you must give them this: Nigerian politicians know how to laugh hard, even when they stand in the dock accused of betraying those they were sworn to serve.