Stocks, Commodities Up On Hopes For Europe Plan 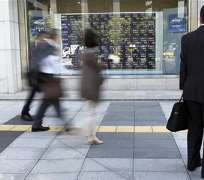 Asian shares rose on Monday and the euro held near a one-month high amid hopes that a crucial week for the euro zone crisis will see policymakers finally come up with a plan to resolve the region's debt woes and recapitalize its banks.

Commodities were also higher on hopes that Europe will avoid a meltdown in its financial system and on signs that China, a key source of resources demand, is containing inflation and so more likely to avoid an economic "hard landing."

G20 finance chiefs at the weekend heaped pressure on euro zone leaders to get on top of the 2-year-old debt crisis, throwing attention on to what is now being seen as make-or-break European Union summit on October 23.

Some market players are talking of a "binary" moment for the euro zone in which the leaders' summit either comes up with the goods to assuage concerns about the debt crisis or disappoints markets again.

The former might well be taken as a reason for a sustained rally in riskier assets such as equities and commodities. The latter would almost certainly spark a sell-off.

The materials sector .MIAPJMT00PUS was the biggest gain in the MSCI index, boosted by a 2.9 jump in shares of mining giant Rio Tinto (RIO.AX) after it said it plans to sell 13 aluminum assets, trimming the business it expanded with the badly timed $39 billion acquisition of Alcan four years ago.

U.S. stocks rose on Friday, with the S&P 500 .SPX up 1.7 percent, on optimism about Europe and after strong earnings from Google Inc. (GOOG.O), as Wall Street shares notched up their first back-to-back weekly gains since early July. .N

EURO STEADY
The euro held firm after posting its biggest weekly gain in 9 months last week. The single currency traded around $1.3854, down a touch on the day but well off a 9-month trough of $1.3144 set on October 4.

"After the developments at the latest summit, we can assume that at long last concrete measures to solve the crisis will be implemented next weekend," said Sumino Kamei, senior currency analyst, Bank of Tokyo-Mitsubishi UFJ.

Such measures are broadly assumed to include a plan to make Greece's debts more manageable through bigger "haircuts" than have already been agreed for private bondholders and bolstering the firepower of the euro zone's rescue fund.

If EU leaders fall short of the "grand plan" to address the region's sovereign debt and banking woes that markets are now expecting, the euro will quickly come under renewed pressure, traders warned.

Hopes of significant progress in Europe have also brought relief to Asian credit markets, with spreads on the iTraxx Asia ex-Japan investment grade index tightening further on Monday. The index has now tightened by a dramatic 26 basis points over the past week.

Gold, which in recent months has switched from a negative to a positive correlation with riskier assets such as industrial commodities and stocks as safe haven investors turned instead to the dollar, rose 0.1 percent to around $1,680.70 an ounce, after its biggest weekly gain since early September last week.