THE PREVAILING CLIMATE OF INSECURITY IN KOGI STATE POLITICS 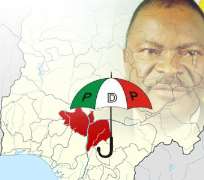 The special and controversial circumstances surrounding the recent primaries election conducted by the ruling PDP Party for the determination of its candidate in the forthcoming governorship elections are disturbing signals for democracy. That things are getting ugly for Kogi State PDP ruling Party as majority of its supporters have called for an end to impunity by their present party leadership is not a surprise but the worrisome issue is that the conflict in the PDP Kogi State is not limited to the Party, it poses a fundamental domestic challenge to Nigerian’s democracy.

Even the attempt by the State PDP leadership to draw on an inexhaustible poll of distrustful reasons to justify the process it engaged for conducting the new primaries may never be sufficient to dwarf the many voices and credible evidence of people that claim that the fresh controversial primaries conducted remains a big fat lie because the Party did not show commitment to an equitable electoral process beyond securing its own interest.

It is unfortunate that our Party leaders in Nigeria never learn from their mistakes, even now that there is enough doubt in the credibility of the Kogi State PDP party primaries which makes it unacceptable in any decent democratic society, the State Party leadership seems unperturbed. In any case, not many people would seriously expect an admission of guilt from the Kogi State PDP Chairman because it is either that he is adhering to instructions of the State Party leader on his purported choice aspirant or has been attracted to huge amounts of money allegedly spent by a particular contestant. Either way is sufficient toserve as a great stimulus for the Party leadership to have gone to any length as alleged including manipulating delegates list for the elections to ensure that the primaries election result is written in favour of their anointed contestant.

The widely denounced process of the PDP primaries and its rejected results by the majority is highly akin to an intolerable electoral malpractice that will make it difficult for people to enjoy their mandate in a democracy. Regrettably, from the events and actions after the Kogi PDP primaries, it is obvious that the State PDP leadership is directly or indirectly helping to fertilize a good breeding ground for a culture of violence in our electoral process which will neither help to usher in the people’s choice of a new governor nor consolidate Kogi’s democracy.

Governor Ibrahim Idris, the Kogi State PDP Party Leader and Chief Security Officer of the State has not said much to address the widely perceived unfair primaries but it is obvious that his attitude of being economical with words has thrust him into danger of finding himself in the same position as a man who claims to speak for the advancement of democracy but is informed and guided by self greed. What this simply means is that the level of fraud in Kogi state primaries election as narrated by majority of PDP members may be beyond the type that can be solved by State PDP leadership which coincidentally is the assumed major culprit.

Targeted and genuine reconciliatory efforts are very necessary to ensure that the present electoral conflict in Kogi State does not turn violent. Indeed, if the right measures are not taken, it is most likely that those who feel frustrated by the existing system may turn to violence and it would not be far before the international community knows the truth about Nigeria’s democracy. This is the time for the National PDP to encourage consultations with stakeholders in the primaries election to increase its understanding of how to tackle this democratic impasse but unless the National PDP is perceived as unbiased, there is little chance that it will be able to resolve the Kogi crisis.

Besides, the growing rumour that the National PDP has already been compromised on this issue by the State Party leader through disbursement of billions of naira, President Goodluck Jonathan, the PDP National leader cannot ignore the prevailing climate of insecurity and alleged corruption in Kogi state perpetuated by members of his ruling Party, otherwise, Nigeria’s democracy will be put on trial by the global democratic community. The task before President Goodluck Jonathan is simple. The President must ensure that his house is put in order by ensuring that the Kogi state PDP fulfilsits constitutional obligation to protect our democracy and where necessary, the President should initiate a peace plan for the Kogi state PDP by showing great interest in launching a serious political dialogue process that will address the fundamental issues raised in the flawed primaries election.

Ordinarily, in a situation where it is obvious that an election was not free and fair, it would have been the role of the Independent National Electoral Commission (INEC), the regulatory agency to take a decision but given the constitutional limitations of INEC on Party primaries as observer, it may be unconstitutional for INEC to cancel such a fraudulent exercise. However, no law restrains INEC from making public the reasons why it withdrew its officials from the venue of the Kogi PDP primaries at the 11am as widely reported by other observers of the PDP primaries.

For Nigeria’s democracy to be accorded sustained respect, the people’s choice in Kogi State should not be stolen or taken away from those who have earned it through due process. If the PDP cannot do something about this, then the people of Kogi will have no other choice than to stand together and truly, the people shall govern. Kogi state needs a democracy, but the choice must be made by the people and not just by a powerful few.