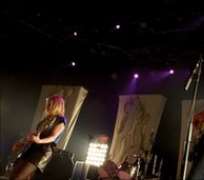 Sonic Youth co-founders Thurston Moore and Kim Gordon have separated after 27 years of marriage, casting doubts over the future of the band.

The US rock band will go ahead with its South American tour next month, but plans beyond that are “uncertain”, its label's parent company said.

The couple live with their 17-year-old daughter, Coco, in Massachusetts.

The couple, “married in 1984, are announcing they have separated,” Catherine Herrick, a spokeswoman for Beggars Group, the owner of the band's Matador label, said in a statement.

“Plans beyond that (November) tour are uncertain. The couple has requested respect for their personal privacy and does not wish to issue further comment.”

The South American tour begins in Buenos Aires, Argentina, on 5 November, and ends in Sao Paulo, Brazil, on 14 November.

Moore met Gordon when she was part of a band named CKM.