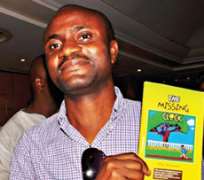 Many Nigerian writers dream of having a hundred thousand dollars for keeps, but it is more of a pipe dream for our scribblers faced with circulation setbacks and low sales digits. But, for Adeleke Adeyemi, it was a dream come true as he won the NLNG The Nigerian Prize for Literature with his book, The Missing Clock, earning himself $100,000.

It was a hard-earned victory for Adeyemi, who writes with the pen name of Mai Nasara, having emerged from the poll of 126 (one hundred and twenty-six) Nigerian writers, who submitted their entries for this year's prize dedicated for Children's Literature.

Briefing newsmen at Eko Hotel, Lagos, on Monday, the chairperson of the panel of judges, Prof. Akachi Adimora-Ezeigbo, said an initial abridged list selected by the judges was based on such technical points as the year of publication (2008-2010), appropriateness of the title of the entry, overall packaging or visual aesthetics (gloss, print, colour, editing quality) and illustrations. Only forty-two writers made it past this stage.

The next stage, said Ezeigbo, involved a closer assessment of the works for evidence of literary excellence, apropos, including: aesthetics of production, language/ vocabulary, characterization, plot, cultural relevance, core values and illustrations. Hence, the list was narrowed to twenty, then twelve and six, and finally the shortlist of three: Eno's Story by Ayodele Olofintuade, The Great Fall by Chinyere Obi-Obasi and The Missing Clock, which eventually emerged winner.

The award-winning story is centred on the four-year-old hero, Banji, and his parents, Mr. and Mrs. Tobe. By happenstance, the naÃ¯ve act of the hero in planting a bunny clock in the garden at his home triggers a number of activities that compels his parents to embark on an agricultural project that brings the family enormous wealth.

The judges hailed the book for celebrating 'ingenuity, hard work, faith, creativity and self-reliance'. The glowing comments on The Missing Clock continue thus: 'The narrative sparkles in a correct and efficient language that reveals the individuality of characters and brings out their mannerisms and peculiarities. It celebrates environment health and conversation. Written in a simple narrative style using the omniscient technique, The Missing Clock dramatizes the importance of growing food and returning to the earth, the sustainer of human life.

'A gifted storyteller, Mai Nasara explores the consciousness, emotions and actions of a child in a fascinating narrative distinguished by the simplicity of its themes, ideas, languages and style. Indeed, this is a loveable and credible novel that endorses family cohesion and responsible parenting that would guide children to become imaginative, well-motivated and balanced individuals.

'Banji is shown to be truly fortunate to have parents who tolerate his naivety and allow him to grow up a normal child. The Missing Clock meets basic requirements of art for excellence in children's literature: for example, well-realized characterization, well-developed plot, accurate use of language and useful lessons to be learnt by readers. It is a well-told story.'

Other members of the panel of judges, who judged this year's prize, include: Professors Ini Obong Uko, David Ker, Yakubu Nasidi and Lekan Oyegoke.

Responding to inquiry on why this year's winner was announced in a press conference without the usual grand award nights that feature crÃ¨me of the society, the Public Affairs Manager of NLNG, Mr. Ifeanyi Mbanefo, said the prize itself should be more important than the celebration. However, he assured that the winner will be presented to the public early next year at a reception organized by the oil and gas giant.

The Nigeria Prize for Literature is aimed at identifying excellent literature and reward it. Its overall objective is to encourage and stimulate authorship and the development of Nigeria literary culture in terms of creative writing, production and reading and in the process guide literary taste.

So far, eight writers have won the Literature Prize: Ezenwa Ohaeto and Gabriel Okara (2005), Ahmed Yerimah (2006), Akachi Adimora-Ezeigbo and Mabel Segun (2007), Kaine Agari (2008), late Ezenwa Ohaeto (2010) and the current winner. No prize was awarded in 2005 and 2009 after the Literature Committee flawed the quality of books on the long list.

Commenting on the significance of the annual prize, former winner, Gabriel Okara, told NLNG: 'I consider it more valuable than the Commonwealth Prize I won back in 1979. Winning the NLNG Prize means I have been recognized in my home base. It is important to me and has given me confidence in my own base about my writing.'

This year's winner, Adeleke Adeyemi, is a journalist, poet and dramatist. The Missing Clock is his second book after The Mandate of MKO Abiola, a play for the radio.