Between Joke Silva And Tuface Idibia 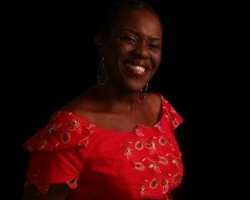 Joke Silva is one of the most respected actresses in the Nigerian movie industry, known as Nollywood, while Innocent 'Tuface' Idibia, on the other hand, is also one of the most popular music stars in Nigeria.

When Tuface was asked recently to mention some of the best talents he admires in Nollywood, he mentioned the name of the veteran actress, Joke Silva,who is also the wife of star actor, Olu Jacobs.

However, http://nollywoodgists.com observed that if not the first, Tuface is surely one of the Nigerian musicians after the heart of the actress.

This was evident considering how she was dancing and cheering the MOBO Award winner during his performance at MTN Project Fame West Africa programme held at Ultima Studio, Omole, on Saturday.

The actress could not hide her love for Tuface's music as she was singing along with him.

Some of the tunes that Tuface performed with a live band include True Love, African Queen and If Love is a Crime.