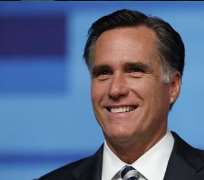 Mitt Romney leads the field vying for the Republican presidential nomination but fewer than one in four of the party's voters back him as a surging Herman Cain gains ground, according to Reuters/Ipsos poll released on Wednesday.

Romney, a former Massachusetts governor, is holding on to his support but failing to increase it significantly, according to the survey, which also showed President Barack Obama facing deep unhappiness among voters about his performance.

Romney was backed by 23 percent of Republicans in the October poll, up from 20 percent in the most recent comparable Reuters/Ipsos poll carried out in June.

Cain, a businessman who has emerged as a surprise top contender after proposing a radical tax reform, nearly tripled his support among Republicans in the same period, leaping to 19 percent from 7 percent four months ago.

"In the Republican presidential primary, everybody still says Mitt Romney's the front-runner," Ipsos research director Chris Jackson said. "And he is ... but he's certainly not any sort of dominant front-runner."

In the latest poll, Texas congressman Ron Paul was third with 13 percent and Texas Governor Rick Perry fourth, with 10 percent.

Supporters of Sarah Palin, who announced last week she would not run for president, have not coalesced behind a single candidate, the survey found.

The poll was conducted October 6-10, before a debate on economic issues on Tuesday night in which Romney and Cain had strong performances and Perry failed to make up the ground he lost when he stumbled through two previous debates.

However, things could change dramatically before a nominee is chosen to oppose Obama in November 2012. Four years ago this month, Rudy Giuliani was the leader among Republican presidential hopefuls, well ahead of his nearest rival, Fred Thompson, who like Giuliani left the race early.

Arizona Senator John McCain, the eventual nominee, was in third place in October 2007.

The margin of error for Republicans among the 1,113 people polled was 4.8 percentage points, leaving Romney and Cain in a virtual tie.

OBAMA TAKES HEAT FROM VOTERS
Whichever Republican eventually wins the nomination to run against Obama in 2012 will face an incumbent facing a very unhappy public.

The percentage of Americans who disapprove of the president's job performance has edged up to 50 percent from 48 percent in the past month and the percentage who strongly disapprove has risen to 34 percent, the highest level since Obama entered the White House.

Fewer than half -- 47 percent -- of Americans approve of the way Obama is handling his job as president, a figure unchanged from a poll conducted in September.

Obama has taken a tougher line against political opponents as he has pushed for passage of his jobs bill but the new approach has yet to make a difference among voters.

The survey showed that 74 percent of Americans believe the country is on the wrong track, compared with 21 percent who believe it is going in the right direction.

There was one bright spot for Democrats. More registered voters -- 48 percent -- said they would back Democrats in congressional races if the November 2012 elections were held today, compared with 40 percent who would support Republicans.

But their verdict on how the two parties would handle the struggling economy -- the issue expected to be central to the 2012 election -- generally favored Republicans.

On reducing the deficit, Republicans have the lead at 44 percent to 35 percent for Democrats; they have a 43 percent to 36 percent lead on their ability to make the country globally competitive; and more Americans thought they would generate economic growth with a 43 percent to 38 percent edge over the Democrats.

The two parties were tied on job creation at 41 percent each and close on "dealing with taxes," with 42 percent for Democrats and 41 percent picking Republicans. On the economy overall, 42 percent favored Republicans and 40 percent choose Democrats.