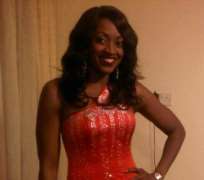 Although gospel music award winner Sammy Okposo and star actress Kate Henshaw's love affair ended several years ago,many in the showbiz industry still make reference to the affair and still wonder why it never led to the duo marrying each other.

About four years ago in an interview he granted a leading softsell magazine,Sammy had stated that he and Kate Henshaw didn't get married because he was not physically and psychologically ready at the time which led to Kate quitting their love affair to marry her Briton husband,Mr.Nuttal.

Last year,Sammy took the bull by the horns when he wed beautiful Ozioma Mkparu in a classy society nuptial.

But a year after Sammy's wedding,Kate Henshaw Nuttal,who is the face of Onga seasoning cubes and ex Globacom Ambassador,has gone down memory lane on her erstwhile affair with the multiple awards winning singer.

In an interview with Entertainment Express,Kate made deadly allegations against the singer,alleging that while their love affair lasted,he used to beat her silly.

According to her,she was once a victim of an abusive relationship that lasted for about three or four years.Pressed further to give the name of her lover who used to abuse her,Kate declined.

However,her description of the person has made everyone inundate us with the fact that she was referring to Sammy Okposo.According to them,no other ex boyfriend of Kate is a successful entertainer who is also married.

Kate had let out in the interview that, We are both separately married now and still waxing stronger in the entertainment world.Those that knew us then know the person and they also know his name.

This many have since interpreted to mean Sammy whom everyone in the showbiz industry knew was Kate's man then.

Read her comment;The extract from the interview.

I can't withstand violence in a relationship. I was once a victim. The relationship lasted for about three/four years. I didn't know who I was then. I was so timid, I almost stopped smiling and almost stopped laughing, but there was this inner strength in me that helped me to rediscover myself. In fact, I had no self esteem then. I wanted to change and be who I was not, based on the ill treatment and violent nature of my man then. He was constantly abusing, beating and battering me inside the house and in public places. I think there was a time when I walked round with bandage on my leg, courtesy of my violent lover. Funny enough, this violent lover of mine claimed to love me and wanted to marry me then.

I wanted to marry him. I had started buying pots and other household items because I was in love. I wanted to settle down, I wanted to have my children with him. I wanted to be happy and continue to do my work but he was that bad. I kept think he would change, but he didn't. I tried my best to be everything to him, but finally I said enough was enough, this relationship was not of God and not for me. During those turbulent periods, I was ashamed. I couldn't tell anybody. Why did I stay? It's very ironical because after the beating comes the gifts, the begging, the cries and words like 'It's your fault, I'd try and change, it's not me..' Everybody will now be saying forgive him, he's begging. In one of the beatings, he broke my ankle..but let's not dwell much on things of the past.

I cannot tell you his name, we are both separately married now and still waxing stronger in the entertainment industry. Those that knew us then know the person and they also know his name.

No reaction from Sammie Okposo on the allegations yet.

THANK GOD I DID NOT MARRY A NIGERIAN(ACTRESS KATE HENSHAW NUTTALL.