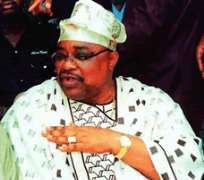 Chief Adebayo Alao-Akala
Former governor of Oyo State, Chief Adebayo Alao-Akala was yesterday arraigned in an Oyo State High Court sitting at Ring Road area over allegation of mismanaging over N25 billion while in office. But the coast remains unclear for the duo of Otunba Gbenga Daniel and Alhaji Aliyu Akwe-Doma, former governors of Ogun and Nasarawa states as they could not be arraigned, yesterday.

They were arraigned on an 11-count charge of conspiracy, awarding contract without budget provision, obtaining contract by false pretence, acquiring property with money derived from illegal act, as well as concealing the genuine nature of the ownership of property.

According to the EFCC in the suit no I/ 5 EFCC /2011, Akala and his co-accused were alleged to have conspired among themselves between 2007 and 2009 to award contracts without budget provision for the sum of N8, 500,000,000 (Eight billion, five hundred million) for the construction of roads in the 33 local government areas in Oyo State.

Akala and Agboola were also accused to have between 2007 and 2009 conspired to award contract without budget provision in the sum N2, 270, 565,000(Two billion ,two hundred and seventy million five hundred and sixty five thousand naira) for the supply of 33 drilling machines on behalf all the local governments in Oyo State.

Both Akala and Agboola were further accused of conspiring to award another contract without budget provision in 2007 for the sum of N335, 025,000 (Three Hundred and Fifty Million Twenty Thousand Naira) for the supply of 20 Roro trucks and 200 pieces of Skip bins.

The former governor was also accused of engaging in the acquisition of property known as Ile-Itesiwaju located at No 32, Oba Adebimpe Road, Old, Gbagi, Ibadan, Oyo State, another property located on Old Bodija, off Rotimi Williams Street, Ibadan,Oyo State and in concealing the genuine ownership of a property located at No 4, Bromholm Road, Abbeywood, London SE2 9ND in the name of one Oyewole Aiyemidara Akala.

All the three accused persons pleaded not guilty to the counts.

Counsel to the three accused persons, Mamman Osman (SAN) who led three Senior Advocates of Nigeria namely; Chief Bolaji Ayorinde, N.O.O Oke, and G.M.O Oguntade, with 11 others lawyers had earlier urged the court to stand the case down till 4 o'clock, so that the court could hear their bail application. He cited some circumstances, which, he said, militated against the proper filing of the charges against his clients.

Osman argued that it was only around 3.00 am yesterday (Tuesday) that they were served the charge sheet, adding that if granted, it would not tell any prejudice on the prosecution but meet the cause of justice.

But counsel to the EFCC, Chief Godwin Obla (SAN), who also led two other counsel, described the application for a stand down as strange, adding that it was wrong for an accused person to be asking for a stand down of court proceedings. He then urged the judge to use his extra-territorial order so that the accused persons could be remanded in EFCC custody in Lagos.

Osman in his submission said an application seeking bail for the three accused persons had been served pending when the prosecution would be ready. He added that the need to urgently hear the bail application was predicated on the fact that the first accused person (Akala), had for the past six days been in the custody of the prosecutor and had been held beyond the stipulated days.

According to him, the former governor had proceeded to the office of the prosecutor on invitation and had been held since then. He said: 'In effect, the unnecessary stay in the office of the prosecution was the basis for the application for bail. Should the prosecution persist in their demand to further remand them in their custody, they will in effect be asking the judge to commit unconstitutionality and violate the judicial oath which the judge took.'

He insisted that he would need about 48 hours to study and reply to the bail application filed by the accused persons.

Osman, however, responded, saying if the charges could be received at about 3.00 a.m. yesterday and their bail application filed, nothing should stop the prosecutor from responding to the application.

Justice Mashood Abass, then asked for few minutes after which he came back to deliver his short ruling.

Justice Abass in the ruling declared that the court would be unfair to the prosecutor if he was not given the mandatory constitutional period during which he could reply to an application considering the fact that the bail application was served on him yesterday morning.

He, however, added that the court would not close its eyes to the fact that the prosecutor served the accused persons at about 3.00 a.m. yesterday morning and they appeared in court.

Justice Abass, therefore, adjourned the hearing on the bail application till 12 noon today, while ordering that the three accused persons be remanded in the state office of the State Security Services (SSS) at Alesinloye area of Ibadan.

The former governor who was dressed in a white flowing Agbada sewn with voile fabric with a black cap and his characteristic necklace. Akala was driven into the court premises in a white Coaster bus marked Kaduna AG 134 SBA at 8.20 a.m. amidst tight security.

Stern-looking mobile policemen and operatives of the State Security Services (SSS), subjected journalists and visitors to serious check before being allowed into the courtroom. Also present were men of the Police anti-bomb squad combing the court premises, while loyalists of the former governor in their hundreds stormed the court premises in solidarity.