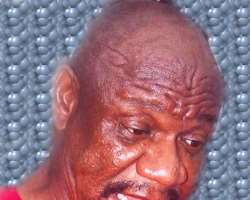 Edo State born Alex Usifo Omiagbo, is a graduate of Mass Communications and Philosophy from the University of Lagos. With a Catholic parentage and background, Usifo, as he is known, grew up a loving, caring but strict father and husband, undermining the many hardened character he plays in the movies. In this exciting chat with Saturday Vanguard, Usifo tells his story to Aramide Pius. Enjoy!

Born 56 years ago into a strict Catholic home of two boys and two girls, of which he is the second child, Alex Usifo Omiagbo has been in the make-believe industry since 1984.

He made his first appearance on TV in 'The Return of the Natives' as Mr. Davis.

In the theatre arena, he featured in 'Awero' as Pa Jimoh. As for the movies, his first job was 'Mission to serve' where he played the role of Mr. President.

Usifo once noted that his major breakthrough was in a long rested soap opera, 'Ripples', where he played Talab Abass, a very cruel character, which was directed and produced by Zeb Ejiro.

“ Ripples' was just a great ride,” and he loved it. Speaking on the quality of movies being churned out on our televisions, this versatile actor remarked that as much as we have all manner of movies, both good and bad being reeled out on our television sets in the country, it is also applicable in other countries, including the advanced countries.

“The issue is that anywhere in the world, even in America, some movies are badly done while others are well done and that is exactly what we have here too.

A producer has to be trained, and when I am talking about being trained, you may not go to a particular school to be trained. But at least you can understudy people who have been there ,which is another form of training in itself. When you have not done it before, and you just dabble into it because people are shooting or because you think you have money, then you are bound to produce nonsense.

This middle aged actor further expressed his shock on how people blame bad productions on irrelevancies. “ I'm shocked when there is a bad production and people say that is how production is. I can remember a production I did sometimes ago at Benin, till today, people are still asking me when we are going back. Because I planned before I took people along.

I did not just start calling people. The problem with the industry is, may be because of ignorance, they don't plan. Once the money is there, and may be they have a story, they just go ahead and start shooting. But even if they don't know, they should call a script conference so that those who know about script writing will make a critic of what they have written.

But they hardly do that and that is the reason we get all the shoddy jobs that we get.”

Usifo remarked that for the industry to move grow, we must be prepared to make up for our mistakes and to learn from those who know. “'The only way you would not move forward is when you do not learn from your mistakes, when you recognize your mistakes and you don't correct it. Of course, you will automatically get to the next level. That is just the way it is, and I think that applies to everything in life too.”

What kind of a man is Alex Usifo, the mean -looking character he plays on screen, Is he, a different person in real life?
“I am a child of God, a born again Christian. The real Alex Usifo is different from the character you see on television. I am not a hard person, I am a very simple person. I can laugh when there is need for me to do. So, because in most of the characters I play, I hardly laugh and when I laugh, it is usually a beautiful one, it is either something terrible is going to happen, or has happened,” he said.

On and off set, Alex Usifo is a disciplined man who will speak his mind to anyone any day, without fear or favour. Little wonder, he is such a no- nonsense father on stage.

Aside being a loving and caring father and husband, this Mass Communication and Philosophy graduate of Unilag is a very principled person who will never compromise good values and conduct in any way at all.
“I am a very principled person and I do not believe that because you love your family or your people, then you have to do that at the expense of certain principles, that will not build up their moral reputation, “ he said.

On how he combines being the good and disciplined father and husband with his job as an actor, the actor said, “Whether you are a busy person or not, there is no way you can be with your family all round the clock but the thing is when you are not busy, the time for my family is sacrosanct, meaning that I cannot toy with that time I have to spend with them. I can decide to forgo a party to be able to be with my family. So, I don't joke with that. So, within that period, I am able to know what is happening in my home or what I want.”

For several years, at least, as far back as his days in 'Ripples', his hair has always been scrapped like and kept shining like a Sahara desert, a style popularly known as Gorimapa. What could have prompted that style? Usifo quickly supplied an answer.

“There have been times when I shaved my mustache, and sometimes my beard. But I have always left my hair shaved because it is my identity and the identity is an indication of my philosophy of life which is: don't follow the crowd, be yourself and be unique.

I believe in being myself all the time. In the beginning, people may frown at it and may not accept it but with time, because you have been consistent with it, they will now accept it. That is why when I stand in midst of crowd, I will always be different. When I talk, I do not talk like others. I talk differently, and if I share the same opinion with others, it is not because I want to belong.

But may be, it is just coincidental. All my life, I have always believed that I must stand out and I must be different,” he said.

For a million naira, will he leave the hair to grow?

“They can only offer me an amount to let it grow, and after the job, I go back to my identity. But no amount can make me change my identity”, he explained. For Usifo, every career is more of a calling than a choice. Advising the up and coming ones, the actor said, “To a large extent, there is a kind of calling in every profession, and if you do not have that calling, you will not last there.

Several years ago, stage plays were fun to watch. But today, all of that seems to have gone with the wind. What could be the reason behind the death of this memorable art?

Usifo's responded thus, “Even in those days that you are referring to, we never really had people coming to watch. Sometimes, you would perform and you would realize that you were performing before an empty hall. A lot of people do not know that is one big reason the stage has suffered today.

He blamed the death of stage plays on the poor audience, adding that in every profession, passion is important, money is also important.