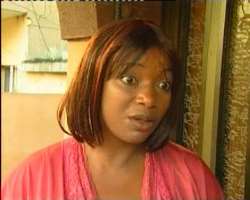 Bimbo Akintola is one actress in Nollywood whose name is synonymous to controversy. To a lot of people, the native of Oyo and Benin versatile actress, Bimbo is one reckless actress that loves adventures and this, according to close sources, has led to her inability to settle down. Her wild lifestyle has made a lot of people tag her as one of the hottest and highly controversial actresses.

Having linked romantically with the likes of RMD, Dede Mabiakwu and others without resulting into marriage, Bimbo, we recently gathered, has decided to go as far as Beirut to get a spouse. Last Thursday, the actress was sighted at one of the hospitality havens on Toyin Street, Ikeja, Lagos stepping out with this new guy. We learnt, the Lebanese, Shriek Abdullahi, is the new 'catch' in the life of the celebrated actress.

Information at our disposal also reveals that Bimbo who came to see the guy on Wednessday night didnt check out until the following day as the two lovers locked themselve into the ecstacy of unending panorama. It will also interest you to know that Shriek Abdulahi, whose character is questionable, we learnt, has been staying in the hotel for weeks without any visible business in sight.

Bimbo decked in black dress with a pack of cigarette in her hand was dead drunk as her new man; Abdulahi accompanied her to the car. More about her affair after this timeout.