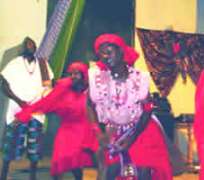 •The cast of Seven-Seven on stage
It was a memorable gathering at the Obafemi Awolowo University recently as rtistes, art enthusiasts, scholars and students gathered to celebrate the magical life of the late legendary Chief Oyewole Olaniyi, popularly known as Twins Seven-Seven.

There is power in numbers, and there is magic in the number seven. And so it was that the life and works of a man of magic, whose name resounds the doubling of the perfect number seven, brought the artistic oomph at the prestigious Obafemi Awolowo University (OAU), Ile-Ife. It was at a symposium organized in honour of Chief Taiwo Oyewole Olaniyi, popularly known as Twins Seven-Seven.

Once a mop-topped, dreadlocks-wearing genius of visual arts, Seven-Seven glided through the bounds of historical sphere in his pursuits, and successfully perfected an epic life journey that established him in the abode of the immortals. And as a way of celebrating Seven – Seven and his achievements, the Institute of Cultural Studies, OAU organized the symposium in his honour.

In his welcome address, the Director of the institute, Dr. Gbemisola Adeoti, said the symposium was put up to acknowledge the enduring life and contributions of Twins Seven Seven. He remarked that Seven-Seven 'lived a life of ebullience and wonder,' having 'decided to live after his parents gave birth to seven sets of twins' that all died at birth. Adeoti disclosed that Seven-Seven was a product of the cultural re-awakening in African arts of the 1960s. He therefore called for a rekindling of interest in the traditional cultural practices of the people. His words 'There is so much treasure locked in the field of culture which we need to cultivate and deploy towards our survival and progress in the current global order with its glorification of neck-breaking competition.'

The Vice Chancellor of the institution, Prof Bamitale Omole who was represented by the Deputy Vice Chancellor Administration (DVC), Prof Jimi Adesanya, said that Seven-Seven's works are a reminder of the cultural practices of the people, noting that he was a legend worthy of the designation. He informed the audience that OAU is on the path to vibrant artistic production and excellence, as plans are on-going to refurbish the theatre structures and train some members of staff in the art of movie post-production editing.

Commenting on the significance of Twins Seven Seven's art in his place as the Chairman of the symposium, Chief Muraina Oyelami, an eminent visual artist observed that Twins Seven Seven's innovative passion for the arts distinguished him among his peers. He recollected that it was the enthusiasm that the late visual artist had for the arts that led him to gatecrash an event put together by Ulli Beier and Duro Ladipo. He remarked that Seven Seven was a good dancer. Said Oyelami 'After watching him, Ulli Beier decided that he should be in our group. We bought all the necessary instruments in order to make him stay. His works were unique. Even his pseudonym was a product of his resourcefulness. He was a born storyteller. Ulli and Georgina did not regret that they chose him'.

Oyelami also thrilled the audience with tales of Seven-Seven's achievements, noting that he was an affable artiste whose ingenuity traversed the shores of Africa. He commended the efforts of the Institute in celebrating an art hero who merits the designation. He also called for the revival of arts across other levels of society.

Royal father of the day, Oba Abolarin, reiterated the need for cultural and value-based education in the society. He said that these are some of the things Twins Seven-Seven stood for, adding that his first encounter with the late artist was in 1993, during a convention of the Socialist Democratic Party (SDP), where Seven-Seven was a delegate championing the cause of the people. He concluded that the revered artiste was a great man. 'He cannot live forever, but his great works and deeds will speak for him.'

While admonishing the youths, the Oba said, 'You our children, look for things that are ennobling, look for things that can create good character in you, the Omoluabi.' If perfection was a subtext for the symposium as one of the speakers suggested, then it made sense. Perfection is one way to understand the person and works of Twins Seven-Seven. Taiwo Oyewole Olaniyi (Twins 7-7) projected the Osogbo Art School to the world stage. He was one of the rare talents honed at the Osogbo School under the famous Ulli Beier, a former director of the Institute of African Studies at the then University of Ife, now OAU. Seven-Seven's works drew inspiration from traditional Yoruba mythology and cultural traditions, often detailing the fabulous and transcendental universe of the gods, humans, animals and also the natural environment.

The establishment of the Mbari Club of Osogbo by Duro Ladipo in 1962, which later came under the supervision of Ulli Beier, played veritable roles in the formative development of Seven-Seven's creativity. He keenly contested for the pervading popularity of Osogbo arts in that era through his new artistic expression, later extending his performances and artistic expressions to town, where the town folks could appreciate his ingenuity, using his performance to enhance the marketing of other skills.

Seven-Seven's influence radiated throughout Nigeria and beyond. He got designated as UNESCO Artist for Peace in 2005, in recognition of his contributions to the promotion of dialogue and understanding among African peoples at home and in the Diaspora. He was an accomplished musician, painter, actor, writer, and poet. He died of stroke in June this year, two months after being admitted at the University Teaching Hospital Ibadan. A successful polygamist, Seven-Seven is survived by 17 wives.

Also in attendance were past Directors of the Institute including Dr. Olu Akomolafe, Dr. Wale Adeniran and Dr. Akin Alao. Intimate and passion-driven performances were equally used to spice up the celebration. Music, dance, costume parades and magical displays chorused from the stage of the performances. Notably, the Sango dance performed by the Association of Noble Artists, which began like a pulsated dance display, took the texture of magic show, as the Sango performer began swallowing raw fire and then, began piercing his cheeks with very long needles. The thriller symbolized the magic and wonder that Twins Seven-Seven's art represented, a force that causes reverie at all times.