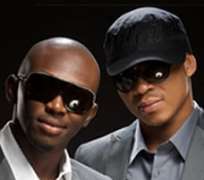 In physical terms the duo of Oziuke Nwachukwu (a.k.a Vast) and Ali Obuneme (a.k.a Smash), of the YoriYori fame are sharp contrasts. But this difference does not affect their passion for music.

Since last November, when they released of their hit single, Yoriyori the song has become a favourite ringing tone for many Nigerians and a national anthem among children.

Apart from music which they both share in common, the two musicians who grew up in the same neigbourhood in Nsukka, Enugu State are equally undergraduates of the University of Nigeria, Nsukka (UNN).

Unlike his partner, Smash who is the last child of seven children said he had no musical background. His words, “I had no choir background or anything but I have always had a flair for music. I often broke the thumbs of the only cassette player in the house while trying to play music by other artistes. I also recorded hip hop songs on my mum's gospel cassettes and she always got angry when she played them afterwards.

In a recent chat with the duo, Daily Sun learnt about their close relationship with another hip hop PSquare as well as their influence on their career among other issues. Excerpts:

On Micheal Jackson
We are not happy about the death of Micheal Jackson. He was a legend who kept light in the entertainment industry. His performance on stage is electrifying and this has a huge charming effect on the crowd. He has also had a strong impact on entertainment entirely and has inspired a lot of young generation of musicians.

But we can say he was more influential to the generation of musicians before us, because we were still very young when he played. But musicians such as Tupac Shakur, Puff Daddy, R.Kelly and Usher are more fascinating to us especially with their hip hop lifestyles.

How we met
We are not brothers but we shared part of our growing up years together in Nsukka where we stayed with our families. Also we are both from Enugu State.
We got to know each other around 1999/2000 when we used to mime songs by American musicians. We had a third member named Bistog, who has pulled out to face his education based on family pressure. We started out as rappers but because of the nature of Nigerian music industry, we opted to do something more at home with the people.

We wrote Happy Day in 2005 and we felt we were doing well with singing and decided to cross over. After the release of Yoriyori in November, 2008, we moved to Lagos permanently in February to be able to do more promotion. However before we moved, Raypower was already playing the music and we cannot but mention the impact of Wazobia FM on the song.

The meaning of Yoriyori
We wrote Yoriyori last year without any girl in mind. We only wanted to do a song which we can use to thank our fans, the media and everyone who has supported our music career. Also we took into account that songs about love thrive a lot in the industry. For instance, Tuface's African Queen which celebrates black beauty is so popular. We started working on the song and we wanted to add flavour to the song and the word Yoriyori came into view. Interestingly, we didn't even know the origin of the word until a man drew our attention to it, that Yoriyori in a dialect from Imo State means “sweetness”.

We almost quit music
Between our first song and the second, we were preoccupied with our programmes at UNN. We weren't performing in shows. Some people even thought we had quit because for two years there was nothing until Yoriyori came. It was frustrating but we thank God that things are different today. We didn't have to struggle too much for funding because we had a record label called A Planet who believed in us. The label is owned by Nwachukwu Nmama aka Bignies who also hails from Nsukka.

What Yoriyori has fetched us
It has affected our finances positively as we no longer look up to our parents for our school fees and upkeeps. More challenges are coming up as people around us. We have equally met so many people whom we never thought of meeting in our lives such as Senator Florence Ita-Giwa, Charly Apoka and so many dignitaries who have invited us to perform for private ceremonies. We never believed we can own cars owners at this stage.

We have been hearing calls from fans fro outside Nigeria.
We plan to travel very soon possibly from September through the end of the year on a long musical tour.

Combining studies with music
Last month we had a number of shows which were billed to last for two weeks but the school had scheduled our examinations around the same time. Miraculously at the last minute a two weeks-strike was declared which forced the school authority to postphone the exams. So I can say we have always been lucky. So at this point, we are not considering deferring our admission. We intend to pursue our degree programmes to the end.

Coping with fame
At school, we relate well with our classmates and friends like we do to every other person. When we released our first single, we still struggle for space with our classmates during lectures and we still do the same thing till date. The difference is that we don't hang around unnecessarily if we don't have lectures. So most of our classmates still see us as the same guys they knew when weren't popular. We haven't had funny experiences with fans because we don't just go out anyhow.

Female fans and our relationships
Vast; I don't have any girlfriend now. I had one before the release of Yoriyori but since Yoriyori came out she felt my fame as an artiste would make me forget her. At the moment, I am single but I can't say I am searching.
Smash; For a long time now, I don't have a girlfriend. I just have friends of both sexes. I believe that when one starts getting too close to women, one may lose focus. It is not that we don't hang out with girls, but not to the point of distraction.

Between PSquare and Bracket
If we have ever tried to imitate P-Square brothers, they wouldn't have allowed us to be close to them. Moreso, we were three when we met them and we wanted to do something with them but it didn't work out, they were very busy with shows from different African countries. Also our songs have a little bit of highlife flavour and we have a lot of fans among the elderly people.
But when we released Yoriyori we finally got the opportunity. The elders gave us a call and encouraged us and asked us to see them whenever we need help.

Message to our fans
We say a very big thank you to everyone that without them there is no Bracket. They should believe in themselves and stay away from trouble.