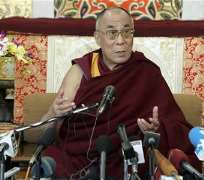 The Dalai Lama, the Tibetan spiritual leader, cancelled a trip to South Africa planned for this week that had put Pretoria in a bind between its biggest trading partner China and one of its modern heroes, Nobel Peace Prize laureate Desmond Tutu.

The Dalai Lama's office said on Tuesday he cancelled the trip intended for him to attend Archbishop Tutu's 80th birthday celebration because South Africa, which has had his application paperwork for weeks, had not issued him a visa on time.

South African President Jacob Zuma's African National Congress (ANC) government had come under pressure from China not to issue a visa to the Dalai Lama, a Nobel Peace Prize laureate Beijing sees as a dangerous separatist.

Tutu said the government's action was a national disgrace.

"I really can't believe it. The discourtesy is mind blowing," an emotional Tutu told a televised news conference from Cape Town.

He said the government's decision was reminiscent of how blacks were treated under apartheid and ignored how the South African masses were helped by the international community to end the oppression of white-minority rule.

"Mr. Zuma, you and your government don't represent me. You represent your own interests. I am warning you out of love, one day we will start praying for the defeat of the ANC government."

Foreign Ministry spokesman Clayson Monyela told Reuters the problem was in processing the paperwork: "South Africa has not said 'no'. The man has decided to cancel the trip."

Tutu's foundation accused Monyela of subterfuge and said the Foreign Ministry tried to hide behind procedural excuses to avoid making a decision.

"It is an insult to our intelligence," Dumisa Ntsebeza, chairman of Tutu's foundation, told the news conference.

"MORALLY BANKRUPT"
The Dalai Lama's office said in a statement: "We are, therefore, now convinced that for whatever reason or reasons, the South African government finds it inconvenient to issue a visa to His Holiness the Dalai Lama."

The Dalai Lama, once embraced as a beacon of peace in South Africa when apartheid ended, has become a diplomatic headache as its economic fortunes are increasingly linked to China, which had pushed Pretoria to reject a previous visa application.

South African officials said in the separate decision about two years ago it denied a visa so as not to offend China. The Dalai Lama was invited to attend a 2010 peace conference by Tutu and former Presidents Nelson Mandela and F.W. de Klerk.

Zuma's government has been criticised in local media for not allowing the visit for the birthday of Tutu, a man internationally respected for helping bring down apartheid rule.

"This is a morally bankrupt decision aimed squarely at appeasing the emerging economic superpower, China," the influential Mail and Guardian newspaper said in an editorial.

"It is, indeed, saddening to count the many countries who stood in solidarity with the anti-apartheid movement and ask: where is our principled stand with the people of Tibet? The gays of Uganda? The dissidents in China itself?"

The Dalai Lama came to South Africa in 1996 to visit then President Mandela who told Beijing it was Pretoria's right to decide on whom it allows into the country.

South Africa exports about $5.5 billion a year in minerals to China and Africa's largest economy has been increasingly a destination for Chinese foreign direct investment.

China last year invited South Africa to join the BRIC grouping, a diplomatic coup for Zuma. It was also seen by analysts as a Chinese stamp of approval for the country's role as a stepping stone to the African continent.

China has ruled Tibet with an iron fist since Communist troops marched in 1950. It says its rule has brought much needed development to a poor and backward region.