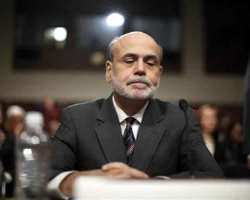 U.S. FEDERAL RESERVE CHAIRMAN BEN BERNANKE IS PICTURED BEFORE TESTIFYING AT A JOINT ECONOMIC COMMITTEE HEARING ON THE ECONOMIC OUTLOOK, ON CAPITOL HILL IN WASHINGTON OCTOBER 4, 2011.
Listen to article

The Federal Reserve is prepared to take further steps to help an economy that is "close to faltering," Fed chairman Ben Bernanke said on Tuesday in his bleakest assessment yet of the fragile U.S. recovery.

Citing anemic employment, depressed confidence, and financial risks from Europe, Bernanke urged lawmakers not to cut spending too quickly in the short term even as they grapple with trimming the long-run budget deficit.

He made clear that the U.S. central bank's policy committee considers inflationary pressures well under control and given high unemployment, would be ready to ease monetary conditions further following the launch of a new stimulus measure in September.

"The Committee will continue to closely monitor economic developments and is prepared to take further action as appropriate to promote a stronger economic recovery in the context of price stability," Bernanke told the Joint Economic Committee of Congress.

His language was firmer than the policy-setting Federal Open Market Committee's statement less than two weeks ago, when the Fed said it would monitor the outlook and was "prepared to employ its tools as appropriate."

Since then, uncertainty about the outcome of the euro zone's sovereign debt crisis has undermined U.S. business and consumer confidence and helped to slow economic growth. The business cycle monitoring group ECRI last Friday said that the U.S. economy is tipping into a new recession.

Asked whether another round of bond purchases, known as quantitative easing, was in store, Bernanke was noncommittal.

"We never take anything off the table because we don't know where the economy is going to go. We have no immediate plans to do anything like that," he said.

The prospect of further Fed support for the economy lifted U.S. stocks though, after the market saw selling early in the day, pushing the S&P 500 briefly dipping into bear market territory.

Andrew Tilton, economist at Goldman Sachs, said contagion from the European crisis is a serious risk, threatening to tighten credit availability in the United States and weaken exports to the region. "This impact is likely to slow the U.S. economy to the edge of recession by early 2012," he said.

Recent U.S. economic data has been mixed after a dismal August, with a key manufacturing survey showing an unexpected improvement, but the slightly better tone has not been sufficient to dispel fears of another downturn.

Fresh clarity on the state of the economy will come on Friday, when the Labor Department releases monthly employment figures. Economists in a Reuters poll forecast a paltry gain of 60,000 jobs for September, and Bernanke in his testimony offered little hope for much improvement.

"Recent indicators, including new claims for unemployment insurance and surveys of hiring plans, point to the likelihood of more sluggish job growth in the period ahead," he told the Joint Economic Committee of Congress.

FISCAL WARNING
Bernanke said government belt-tightening was likely to prove a significant drag on the world's largest economy, which averaged less than 1.0 percent annualized growth in the first half of the year.

"An important objective is to avoid fiscal actions that could impede the ongoing economic recovery," he said,

Stressing that higher inflation earlier in the year had not become ingrained in the economy, Bernanke argued price pressures will remain subdued for the foreseeable future.

That backdrop made it easier for the Fed to launch its latest monetary easing effort in September, when it announced it would be selling $400 billion in short-term Treasuries and using the proceeds to buy longer-dated ones.

Bernanke estimated the new policy would lower long-term interest rates by about 0.20 percentage point which he said was roughly equivalent to a half percentage point reduction in the benchmark federal funds rate. Already 10-year Treasury note yields are at multi-year lows of 1.83 percent, helping keep mortgage and corporate borrowing costs extraordinarily cheap.

"We think this is a meaningful but not an enormous support to the economy. I think it provides some additional monetary accommodation, it should help somewhat on job creation and growth. It's particularly important now the economy is close -- the recovery is close -- to faltering," Bernanke said.

"We need to make sure that the recovery continues and doesn't drop back and the unemployment rate continues to fall downward."

INFLATION VS JOBS
Republican lawmakers pressed Bernanke on whether the Fed's dual mandate for full employment and price stability meant that it had to make compromises on inflation. On the 2012 presidential campaign trail, Republican candidate, Texas Governor Rick Perry earlier said it would be "treasonous" for the Fed to add further money to the economy.

Bernanke was categorical in defending the Fed's record of price stability in recent decades. He noted inflation has averaged 2.0 percent during his tenure and blamed regulatory failures, not excessively low rates, for the financial crisis.

Some economists believe the central bank could announce more concrete targets for policy goals, by linking the path of rates directly to unemployment and or inflation.

In response to the financial crisis and recession of 2008-2009, the Fed slashed interest rates to effectively zero and more than tripled the size of its balance sheet to a record $2.9 trillion, buying bonds off banks balance sheets. Bernanke said this was not bailing out Wall Street, but was part of its mandate to provide price and financial stability.