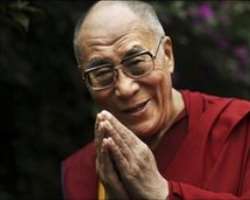 China views the Dalai Lama as a dangerous “splittist”

The Dalai Lama has cancelled his trip to South Africa, where he had been invited by fellow Nobel Peace laureate Archbishop Desmond Tutu.

The Tibetan spiritual leader's office said the South African government had failed to grant him a visa on time.

He was due to take part in Friday's celebrations to mark the archbishop's 80th birthday.

Pretoria has maintained that it did not come under pressure from China to stop the visit.

The row intensified as South Africa's Deputy President Kgalema Motlanthe visited China for four days of talks last week, signing a number of bilateral trade and investment deals. He made no public mention of the visa issue while in China.

It is the second time in two years that the Dalai Lama's visit to South Africa has been blocked.

'Inconvenient'
“His Holiness was to depart for South Africa on 6 October 2011 but visas have not been granted yet,” the Dalai Lama's office in northern India said in a statement.

“We are, therefore, now convinced that for whatever reason or reasons, the South African government finds it inconvenient to issue [a] visa to His Holiness the Dalai Lama.”

The statement said he had cancelled his visit because he “does not want to create any inconveniences to anyone, individuals or governments” in his work, but that he “regrets the inconveniences caused to his hosts and the large number of South African public”.

Beijing considers the Dalai Lama to be a dangerous separatist seeking to lead Tibet in breaking away from China.

But he has repeatedly stated that his goal is for greater Tibetan autonomy rather than independence.

Protests have been held outside South Africa's parliament by his supporters, who say the country's sovereignty is being compromised.

Archbishop Tutu's office had accused the South African government of dragging its feet over the visa application.

At the weekend, the Desmond Tutu Peace Centre put its name to a petition calling for the Dalai Lama to be allowed into South Africa.

Signatories to the petition said they were “ashamed and hurt” by the visa delays and that they believed the Dalai Lama was being refused entry “on the basis of political considerations that are inconsistent with our Constitution and the values contained in it”.