And if you find your wife in bed with your best friend... 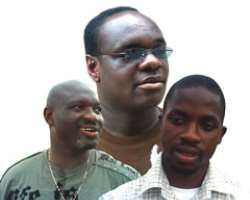 IT'S a weird world we live in, and a lot of the unexpected and strange things happen ev eryday. Some of these things are better imagined, or probably they happened to someone else and you heard about them.

Afolabi just didn't hear about one of these strange things, it happened to him. Clement and Afolabi have been friends since their university days. At a time they both travelled out of the country in search of the proverbial greener pastures, but they travelled to different countries.
Distance, however, did not affect their friendship as they communicated regularly. It was at the different countries where they went to that they met their better halves.

Being patriotic Nigerians, they both came back “home” to settle down and get married. As expected, Afolabi was Clement's best man and his friend also reciprocated the gesture. As close as they were, those who did not know the genesis of their friendship would think they were related.

It is however not a thing of surprise that their friends and their little kids became close friends too. It was Afolabi's niece, who lived in his house, who called his attention to the undue closeness she noticed between Bunmi, Afolabi's wife and Clement.

Afolabi however dismissed this with a mere wave of his hand because he felt it was an imagination of an untrained and immature eyes. However, the unbelievable happened when he caught Bunmi and Clement at a hotel which had been their hideout since God knows when.

His reaction? Well if you were in his shoes, what would your reaction be?

Eze Ndubisi: At that very moment I can kill. But tell you what nothing in this world is worth dying for. I should be able to control myself after the initial shock. It is after that that I will now think of what to do about both of them. Without mincing words from that moment, that friend has ceased to be my friend. Concerning my wife, I will think of what to do with her because of my kids.

Ajibade Babaladie: Eewo! God forbid! I don't have a friend who can go to such an extent with my wife. And my wife? No way. But for this scenario you just played before me! Ha! Ha! I don't know what my immediate reaction would be. I could beat my wife up, I could shoot my friend if I have a gun. Anything unpleasant could happen. But as you said earlier, it is better heard and not experienced. Because if it happens to you as a man, even if you have heard about such several times it could throw you off the balance and destabilise a lot of things, your home, your relationship with your wife, her family, I mean extended family even the friend's family and home.

Dare Ogunjobi: For such a thing to happen it must have started before then. It couldn't be the first time it's happening that I am catching them in the act. A woman who can do a thing like that certainly can kill like wise the friend. Although the Bible stated that what God has joined together let no man put asunder. My sister, she will leave my house the day she is caught, final! Nobody will beg me though it will be painful but it will all end there. I won't ever give her the opportunity of coming into my house to take anything as she could try to kill me. Whatever she needs will be sent to her.

Michael Oladipupo: Ha! no trouble, I will sleep with his own wife too.
But come to think of it, no matter how strong you are, you will be rattled. There is a difference in suspecting them, but confirming it right before your own eyes could give you a heart attack except you don't love the woman. As for the friend, it would be too disappointing. But definitely that woman is gone. If for one reason or the other I allow her to stay on, we will live together as co- tenants, who knows what she would do again? Her next escapade could be my driver or gardener.

David Bassey: No way! Such can't happen to me. My friend and my wife? Where I come from, it is complete abomination, and my wife would not try it even if my friend who may not come from my place try to lure her; she won't fall for such as she knows the consequences.

Segun Cole: There is nothing new under the sun. If a father can sleep with his daughter, what else cannot happen? The scenario is not the “child” of modernisation, it has happened even when “the eyes are supposed to be dark.” But even then, it had its consequences and punishment.

If such should happen to me, although I am not married, that woman is gone and gone for good in my life no matter who or what she is. If you forgive her that, what else do you expect? You can never trust such a woman again and if this happens in a relationship, it is not worth it. So why not end it there and then?