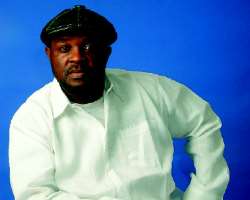 There are quite a number of unique things about this very popular Nigerian gos-pel artiste. For one, he is blessed with a voice that is unmistakable when heard. Again, his dress style always matched with a fitted cap and the never missed swagger in his steps when he walks sets him apart from any other artiste the country can boast of today.

But Buchi is not the lousy type. In fact, the kind of songs he sings have indeed defined his parts. Many today see him as a gospel artiste with a difference. Littlewonder he has remained steadfast for years in the profession he has come to be known for.

Obviously, this 45 year-old father of four is a very busy man. Although he was getting set to go on one of his numerous tours, he still had time to talk to NFC

Buchi actually started out as a resident Disc Jockey (DJ) at the then popular floating Buka Club in Marina with friend, Raskimono who was also plying the same trade. For years he was at it, then he met Chris Oyakhilome of Believers Love World a.k.a Christ Embassy who later brought him to Christ. From there on, there was no looking back for him.

It took another seven years before he released his first album, and when he did, it became an instant hit, winning an award in the first few months. Three more albums had followed just as many will agree that they have indeed been successful.

In this interview, Buchi who also doubles as a fashion designer (but rather prefers to be called a tailor) and equally “triples” as a lecturer talked about not only his music, family and passion, he spoke extensively about his life in Christ and how God has been able to make him lose passion in what had brought him what he thought was joy. Right now, he said he is living the higher kind of life-a life of Christ which brings with it no sorrow, no failure and does not admit the negative.

This is a must-read interview and we hope you'll enjoy it.

The last time I saw you, you weren't looking this good. What's the secret?

If you mean my weight or something else... Well, I give God the praise. I have been living the higher life.

What do you mean by “higher life?”

It's a life in Christ. The life that does not allow failure, sickness and does not admit the negative. It a good life. When you live there, you will have no struggle. I have been living that life.

I do not recongnise them and it is possible indeed to live without sickness. The so called disappointment has now become a part of man's expectations and so they now become stepping stones for them to higher greatness. Something may not happen without the so called disappointments. It is natural to man. Many are the afflictions of man but the Lord delivers him from all, the Bible said.

Not many of your fans know that you've been in the industry for a very long time even before you came out with your first album. You didn't start up as a gospel act, did you?

Well, I'll want to say I did. Before now, when I didn't have an album, I was a night club DJ. I came into Christ in 1992 and since then I have done nothing but the gospel.

You were a DJ for how many years?

How did the transition occur then?

I got born again as simple as that. I gave my life to Christ and things changed. My values changed. The things that gave me pleasure and my lifestyle changed as a result. It just went like that. I lost the appetite for the old life.

Who was the person that brought you into this new life?

Pastor Chris Oyakhilome. I went to see him to ask him some questions actually. He received me in his office and spoke to me for quite a while. I asked him a lot of questions and he answered all about life in general. That was on the 30th of December 1992.

So, when did you go into music?

My first album was released in 1999. That's seven years after I got born again because I didn't think I should naturally continue in music. I needed to find out why I came to God and what he would want me do, not just jump into anything. Even when he told me what I ought to do, there was a time of preparation. He separated me to teach me the word. So, it wasn't just about music. I am first a Christian before a musician or anything else. So I had to deal with that part of it because music in life generally is a slippery terrain. If you are not grounded in the word of God, it won't be difficult to sweep you off your feet. Events, people will come your way. Would you be found standing after everything?

Would you say it was within those seven years that God told you to be a reggae artiste?

(Laughs) No. he didn't but I had reggae in me. I grew up listening to it and even in the night clubs it was strictly reggae. When God wants to do something through you, he uses what you already have.

At the period you came out with your first album, Reggea music was the reigning genre. Many people would want to think that you used that opportunity to launch yourself, what do you think?

Everything we do is subject to various interpretations. You could do something for a reason but a hundred people would find a hundred reasons why you did it. For me, it had to be reggae because that was what I had and God used it.

Don't you think Hip-hop has taken over Reggea in the country?

I don't think so. A lot of the songs we hear today are indeed reggae music. Some people play Root Reggae, some Rubber Dub, some Raga while some play dance hall. Some play another form of dance hall which is peculiar to Nigerians. It a combination of Reggae and hiphop. You have got to know this music to hear it in all the songs. We have a mind set of what reggae is, that's why we don't hear it in other songs. They play variants of reggae but in different styles. We do not have a lot of artistes elevating reggae the way it used to be in the country. There has been a decline in the appreciation of the genre but this isn't the first time it is happening. Inspite of this we still have many reggae lovers in the country.

How many albums have you released so far?

Four albums. The last one was released not too long ago. It's called The Sound of Life. How would I rate the albums? The first was a huge success eventhough it was not an instant market success. It won an award within two or three months after its release but it took about two years before Premier Music signed it up. In 2002, I released So Beautiful. This song had It is well. In 2005, What a Life was released and it had songs like Nmama. It was a success too.

You left Premier Music, why?

For the first time, I had this album release on my label Bigtunes label. I didn't really leave Premier Music. The two contracts I had with them for my first two albums are still running. So, I am still on the label. I had to move because times as you know changes. I needed to establish a platform of which younger Christians can ride and showcase themselves. If I remained in a label, I may not be able to actualise this dream, that was why I did it. I have a couple of artistes now and in a short while, you'll be seeing them.

I learnt that you are a fashion designer or rather a tailor as you prefer being called and you design your cloths?

(Laughs) you heard right and yes I design my clothes and have an outfit.

How do you manage both demanding professions?

They are both creative ventures. I find time to design and I love what I do. I particularly like singing, writing and clothing. But my wife runs the clothing outfit and I find time to be there with her. If you have creativity running in you, you'll have various avenues to express them.

You also find time to lecture.

Oh, I have temporarily given lecturing up. It's been a while now since I did it and again it is something I love to do. I hope I get back to it. In a sense, I find the music stage an extension of the classroom. I have an audience and message and have a mandate to impact this knowledge into my audience, listeners and my world. It's not all that different, it's just that I can't do any markings and know how well they understood.

Where were you lecturing?

At the University of Lagos in the department of English

You are almost always on tour, honouring series of invitations. How does it affect the home front?

This is where the time of preparation comes in. I knew this time would come. So, God gave me a helpmate. A wife suitable for that purpose who'll take care of her home, children and husband, so, that he'll have ample time for concentration in what he has been called to do.

You have a unique style, what's with you and the cap?

I don't know if I really made a choice at any time to wear the cap or to dress the way I do and walk with a little swagger. This is just the way I love to be. I never set out to have a trade mark. I am just comfortable with the way I am.

Are gospel artistes supposed to be paid when they are invited to churches since they are doing the work of God?

Yes and no. Yes because you realise this is what he does for a living, no because you are not paying him. He is doing it as unto the Lord.

What about you, would you rather be paid?

Some people give to me while some don't

Are you saying you live mainly on the sale of your albums?

I live on my seeds the seeds that I sow. If I have an expectation that I am going to be given one million naira and I was given only N100,000 instead, I could turn it into a million by sowing it as a seed, by giving it to God. So when the Bible said the just shall live by faith, not by salary or record sales, it is what you and your faith make out of the money that comes to you. For me, I live on the fruits of my seeds not that I live on an income. There is so much money in what I do. It's just that I do not expect to get it from the pastor. I get it from God.

How old are you now and where are you from?

I was 45 a few days ago. I was born in Kaduna to parents of Oboro, Umuahia in Abia state, and I have lived in Lagos most of my life.