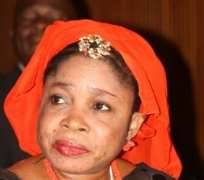 In her kind of trade, academic degrees pale into insignificance without the natural raw materials. But like all special breeds, her pouch brims with the right raw materials – talent, exposure, skills and the right measure of vocal delivery – including God's musical sod, which brews chart-busting songs while as she puts it “simply copies the songs”. According to her, with ears reclining into space as one waiting for instructions from the master, she effortlessly copies as opposed to tasking her brain in the name of writing songs. After this, all she does is simply grill the songs in the strings of her guitar and vocal mill, and then, turn out hits money can buy. The reason, she says, “Music chose me.” Meet Chief Mrs Christy Essien-Igbokwe (MON), The Lady of Songs, for short.

This Tuesday afternoon, June 23, at her country home off Adeniyi Jones, Lagos, she tells the story of a life defined by sweet sounds. Walking into her sprawling green court dwarfed by a white painted high-rise wall and a giant steel gate, this writer's expectation doubled. It was a meeting any journalist would understandably be upbeat about. Eight years ago, this writer had the privilege of editing Glamour Trends Magazine, published by her husband, Chief Edwin Igbokwe, the friendly, ever-smiling and infectiously humble former Executive director of the Punch newspaper. It was a smooth run for the national magazine, which tottered on the fringes of soft and hardcore reporting until something happened – one of those things publishers dread especially in a government that is icy and perky about press freedom. But I save the story for another day, for here is a rare chance to read through the pages of Christy's life, chapter by chapter and to understand her career defined by ten great hits, among other things.

As if programmed to start with the low moments before steadily, but gradually shooting to the ziggurat, Christy lost her mother at the tender age of 13. A few years after, success hit her like a cyclone. She excelled in music and did no less in dramatic arts – showing everyone who harboured some films of doubt that she had the brain, guts and enormous power within. Like all teenagers starting into music early, Christy could not understand the forces behind her intermittent drift into singing, yet she gave herself to it all the same. “Those years,” she tells In the Closet, “All I needed around me were a table, plates and spoon and the next thing you hear would be a danceable rhythm, which my foster mother, Mrs Maria Chukwu, now late, acknowledged made good listening.”

Christy's talent did not stop at the microphone alone. After performing in popular places like the Uka Onu's Club and Unikoko, she was to feature in the New Masquerade, a satirical national television programme that was a-must watch for every family. Playing the character Apena, a rustic girl whose ideas always crossed with her husband's, Christy proved a total entertainment package in the now rested programme.

But this afternoon, you meet a totally urbane woman – in looks and mannerism – so much so that viewing her from the prism of her role as Apena comes close to a glimpse into antiquity. Looking poised, elegant and perfectly co-ordinated, but not over-groomed in a multi-colour richly embroidered boubou, Christy who over the years has effortlessly pulled off stunning looks was simple, yet ravishing. She wore a cross shaped silvery earrings, while another white bead which also held a cross-shaped pearl dangled on her neck. On her fingers were various kinds of oriental bijou, which complemented a golden ring, ostensibly one of her wedding treasures. Donning a braided thick black hair, which is neatly packed into a string that also held some apple-like red, green and white beads drooping as if they were on a tree branch, she cut a picture of a woman living her life to the hilt.

In between seconds as we got ready for the interview, the probing eyes of this writer zoomed in on her glowing, smooth and delicate skin and drifted once again to her thick black hair, strong brows and sleepy eyes – essentials for today's million dollar-earning models – and to the sitting room, quite intriguingly beautiful. You find various kinds of oriental leather chairs in white and wine colours. There were also flower pots, larger than life picture frames hung on high, zebra-like designed rug carpets and the accompanying head rests, which like a gauze on the deep blue rug, perfectly gave the white-painted sitting room a royal outlook. So, could you let us into your musical journey so far? This writer pops in. “It's been great and wonderful,” she says, sounding so confident. “In all my years in music, I never struggled to do anything – write songs, play the instruments as well as produce the music. Everything comes naturally – the lyrics, bass, guitar and piano lines,” she explains.

Interestingly, though music runs in her family – Aunt sings and mother until death, composes songs – it was Maria, her foster mother, who bought her the first radio receiver and tape recorder with which she dubbed songs from 'above'. “Probably coming to the understanding that there was a supernatural power behind my behaviour,” she continues, “the poor woman from Isuochi, Abia State, bought me the fairly used radio receiver to enable me tape my songs.” Christy, an indigene of Akwa Ibom State, reveals that though the radio receiver was in very bad shape, it worked all the same. Little as it were, she confesses, the effort fired up her drive to tap into the latent musical talent within. What happened next is anyone's guess as a home girl suddenly shot into prominence at the launch of Freedom – her first album.
Its success was followed by her first baptism of musical performance at

Unikoko, which also doubled as venue of the album presentation. “In fact”, she says, “the owner of the place gave me the place without a fee after listening to the songs.” Apparently, this was where it all started. So, what brand of music do you play? “I play universal music,” she quickly replies, and then goes on to lecture you that it cuts across all segments of the society and appeals to all tribes. Again, this explains why you find her music laced with Igbo, Yoruba and Hausa languages, including her native dialect. Once upon a time, Christy was unanimously nicknamed The Lady of Songs by all entertainment journalists in recognition of her enormous musical talent. But Christy has had her fair share of career challenges. According to her, her promising career almost dipped when the chairman and publisher of The Punch newspaper, Chief Olu Abodurin, died. Christy, who describes the man as a father figure, reveals that he had hired a hall in preparation for the launch of her second album, Taking My Time, before his death. “It was a hard blow on me, because he was a father figure to our family,” she says, pointing out that his death was responsible for the lull in releasing the album. As she speaks, you could still see the pain in her facial expression as if it were yesterday.

So, wondering what you think of the musical videos on our television screen today? Innocent and harmless as the question seemed, Christy adjusted her sitting position, cooed into the eyes of this writer and sighed. “The world as a whole is going crazy. Our youths have gone astray and we have got to be in prayers,” she tells this writer, matter-of-factly. Not finished as yet, she put the blame on the government at all levels. “The government has failed in its responsibilities by subjecting everybody, especially the youths to untold hardship in the midst of plenty,” she fumes anger written all over her face. “What do you expect when there are no plans by government to create jobs? What do you expect when political office becomes a short cut to amass wealth? So, what do you get? The youths now use music to let out the steam and frustration,” she says with finality. She describes Hip-Hop as a song of protest, stressing that until the government does its own part, there would not be an end to protests through suggestive videos.”

But is there nothing the Performing Musicians Association of Nigeria, PMAN, can do to rescue the situation? “PMAN itself is sick in the head. Or, if the head is sick, can the hands, legs or other body parts function well?” Christy who founded the musicians' body asks rhetorically. So, tell us about what you did when you were president of the association? In the Closet pokes. “We had our focus; to fight piracy and make musicians earn from their works, but successive leadership of the body turned everything upside down,” Christy laments. According to her, her administration had outlined ways to fighting piracy in the industry, including partnering with the government, corporate bodies and individuals, but regrets that everything collapsed due to the lack of will power on the part of government. “Our government is very quick at saying something they don't really mean,” she says.

Her mood was probably what this writer needed to extract comments regarding the controversial printing press her company supplied to Akwa Ibom State. Perhaps, deceit on the part of government reminds you of the printing press controversy? “Absolutely,” she replies. According to her, the controversy was politically motivated, because of her husband's relationship with the former governor of Akwa Ibom State, Obong Victor Attah. “I want to put it on record that the printing press controversy was politically motivated. There is nothing wrong with the press,” Christy whose eleventh album is expected next year tells this writer. Are you really worried about the face-off between Obong Godswill Akpabio and his predecessor? “Why will anyone not worry, especially as it is undeserving of a man who has done so much for the State,” Christy points out. Like a Midweek sermon she continues. “Please, help tell Governor Akpabio to leave Obong Attah alone. He should not abuse God, because if God uses a man to bless you and you turn around to abuse the man, you are abusing God. Let Akpabio learn a lesson from the story of King Saul and King Ahab.” So, any regret? “Not really,” she tells In the Closet. But she admits making a mistake by failing to heed to the advice of Evangelist Ebenezer Obey, who according to her, wanted her to lead PMAN at its formation. “I felt I needn't be its founding president simply because the idea came from me,” she explains. However, she blames this failure for what she says is the lack of focus bedevilling the association many years after.