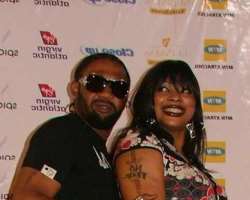 It's no longer news that the popular actress, Ayo Adesanya has since packed out of her matrimonial home due to battering she was constantly receiving from Goriola Hassan, her husband. What is new and hot in town is about Ayo's relationship with one Abuja big boy who goes by the name Tunde. Tunde, a top contractor in Abuja was said to have met Ayo at a party and before one says Jack Robinson something close to amorous affair was alleged to have cropped up between them.

Ever since there first encounter, the twosome, we gathered, have since glued together like the Siamese's twins. Ayo, according to reliable sources, was facing a lot of marital challenges. Goriola, the America returnee film maker's hubby, allegedly said to have turned a Samuel Peter of our time shortly after their marriage as he was always battering and beating her even, sometimes, to a coma. Also, infidelity on the part of the husband was part of the many problems that led to Ayo 'walking away from the trouble in her matrimonial home'.

“For six years, Ayo had been enduring, patching things up all in the name of keeping a marriage, making it work unlike her colleagues but today it's a different thing as she's moving on with her life. The last time we had a talk, she said she was now in love with one Tunde who resides in Abuja and from the look of things, I think Ayo is happy where she's now, though, Tunde is said to be a happily married man with kids, however, she wont be the first person to be married to a married man before besides, they are not going to live in the same house with the first wife, so what's the fuse about this married man thing!. A close friend of Ayo disclosed shortly after the news of her marriage to the Abuja contractor broke out.

In a swift dimension, we were told that Goriola Hassan, Ayo's estranged husband is already putting finishing touches to his new flick entitled Igbako. Igbako is a story of a poor man whose wealth was questionable through his in-law. When he couldn't meet up with the oath he sworn to, he reneged from the agreement and the result was catastrophic. Whether Ayo was part of the over N3m movie is still unknown as all effort to reach the estranged couple was proved abortive. The story, however, still continues….