Texting Away An Addiction 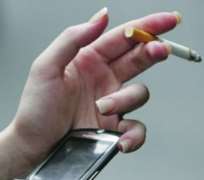 To quit smoking is generally a tough battle. As a matter of fact, many smokers are back to the habit just as soon as they decide to stop smoking. However, sending text messages to support the decision has been said to decrease chances of a relapse.

This strategy was recently adopted by a group of researchers in the United Kingdom, UK. To test its efficacy, the scientists looked at a group of 2,900 smokers who were sent encouraging text messages daily. The messages, 'You can do it' was sent for a period of six months. At the end of the study, more than 10 per cent of the smokers had quit.

Caroline Free who led the txt2stop trial at the London School of Hygiene and Tropical Medicine said, “Text messages are a very convenient way for smokers to receive support to quit. People described txt2stop as having a friend encouraging them or an angel on their shoulder. It helped people resist the temptation to smoke,'' she said.

Already, this non-medical approach has been hailed in the medical field. Derrick Bennet and Jonathan Emberson from the University of Oxford said the method could help cut deaths from smoking-related diseases. “The lessons learned from the txt2stop trial could not only provide a new approach to cessation in high-income and middle-income countries, but could also provide a useful starting point for implementing behavioural change in resource-poor settings.'' The World Health Organisation says six million people die each year from smoking.