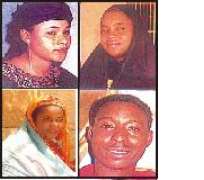 Apart from corruption, the Niger Delta problem and perhaps the epileptic situation of power supply in the nation, another negative addition to the characteristics of Nigeria is the very bad road networks that connect the different parts of the country. From the North through the South and the Eastern part of the country, commuters go through hell moving on Nigerian roads which is regarded by many as death traps. Most people now have resorted to fasting and serious praying for their loved ones when they are traveling because of the bad conditions of Nigerian roads. Death is inevitable and it usually comes with so much pains and sorrow, however, it is even more painful when it is sudden, especially through road accident.

Kannywood, the name given to the Hausa movie industry has in recent times faced with the challenge of the Kano state censorship board that have been making life difficult for the industry, owing to the famous Hiyana Video. However, the industry has also been mourning the sudden passing away of its members. While some die on their sick beds after illness, majority of the fallen heroes went to the great beyond in similar fashion which is road accident. They all died at a time when their people are expecting their safe arrival. Because of the huge interest and fan base the industry commands, the pain caused by the death of the Kannywood stars is felt not only by their families and the industry, as many well wishers also share in the pains. While the deceased are resting in peace at the moment, the uniform circumstance leading to their deaths has made many fans and keen followers of happenings in the industry to come up with their reasons as to why Kannywood continues to lose its stars to road accidents.

There are those that believe because the industry is competitive, where people compete for fame and supremacy, the death of the stars on the roads may be the handiwork of their colleagues. The thinking being that they could occupy the space provided by their exit of the shining stars. However, this assertion is discredited by many who believe that in Islam, Allah (SWT), is the giver and taker of life. Another school of thought is that, the death largely has to do with over speeding. Their argument is based on the fact that, most of them were in a hurry to arrive their destinations to shoot movies or perform in theater which makes them to travel beyond the normal speed limit. That may be the reason why whenever there is any accident involving the Kannywood stars, the results are mostly death on the spot.

The bottom line however is that the bad road in the country is the major contributor to the death of these stars. Newspage Weekly gives a detailed report of some high profile deaths of Kannywood stars through road accident.

The news of the death of a promising film director, Aminu H. Yakasai and an actress Maijidda Mohammed, who lost their lives along Kano-Katsina road, just after Bichi, when the vehicle they were travelling with got involved in a ghastly accident, is still fresh in the minds of the people. They were on their way to Katsina to shoot the film, Arziki Da Tashin Hankali. The duo died on the spot.

However, the first major incident of accident in the industry was that of Balaraba Mohammed, who is a shining star among the Kannywood actresses; she was on the grade A actresses and had everything going for her. She was a combination of brain and beauty, who had just gotten married to another lead actor in the industry; Shuaibu Lawan Kumurci. But she died in a ghastly accident when she was being conveyed to her groom's house in Kano from Kaduna as a bridegroom. The incident occurred along the Kaduna-Zaria, part of the Kano-Kaduna dual carriage way. Many of her fans wept when they heard about the untimely end of the life of the promising actress. A lot of them could not believe the story even after it became clear that the screen goddess was no more. Because of how much her fans adored her, there was a rumour about her resurrection, whic spread like wild fire to the extent that some were even swearing that they saw her alive. It took time before some of these people come to terms with reality.

Another tragic exit was the one involving Malam Kassim, Nura Mohammed and Ali Bala who met their sudden death near Zaria, along the Kano-Kaduna dual carriage way, when the vehicle they were travelling with got involved in an accident that sent them to their early grave. Malam Kassim was an actor; Nura Mohammed was an artist while Ali Bala was a cameraman, travelling to Kaduna where they planned to produce Aminu Mai Dawayya's album, which was never a reality, as they perished before they could make it to Kaduna.

Ahmed S. Nuhu had climbed through the ranks to establish himself as one of the best actors in the industry. He had won many awards and was one of the fans favourite. It never occurred to the late Ahmed who was jovially cruising in his car to Maiduguri from Kano that it was his turn for the journey to the land of his ancestors. The car he was travelling ran into a pot hole and before he could muster enough tact to swerve the car to position, the force was too much and the car went on a chained somersault that took it almost half a kilometre before finally letting a screeching sound that sent shivers down the spines, an eye witnesses said. He was travelling with a colleague, Hamza Jos on an invitation from Maiduguri where they were to perform at a wedding ceremony but they never to got their destination as they both loost their lives in the accident”.

Another road accident that claimed the lives of Kannywood actors was the one that involved Hussaina Gombe (Tsigai), and a colleague; Sha'aibu Dan Wanzan. The duo were coming back from Lagos where they were said to have performed but never to return as they lost their lives in an accident. As a film character, Tsigai was a humorous character, blessed with a mouth to talk that she even prides herself of the ability to pay back one thousand times if ever provoked by a single remark which she felt insulting. As a house wife in movies, she always performs her matrimonial duties and accords respect to her husband the way it should be but, never allows her husband to go beyond borders, she will rise up to challenge him come what may and it always pays up. Sha'aibu Dan Wazan on the other hand was equally a very good character that always tries to link up past of and present, especially by way of his trade as a native barber. Apart from the instinctive humour in his compelling personality, he always carries his viewers along in his films in the most simple way through the 'choice' of words that does not hurt anybody's feelings.

Lately, the shocking news of the death of Hajiya Jamila Haruna came last month. She died on Kano-Abuja way on her way back from the last PDP special national convention. Jamila was also a good actress who always acts with passion that her fans never get tired of her films. She was said to be relating very well with her other colleaguess, she was humble, dutiful who never disappoints when it comes to business.

Some Kannywood Stars who lost their lives through accidents and the likes: