THERE IS NO JENIFA 3-Funke Akindele 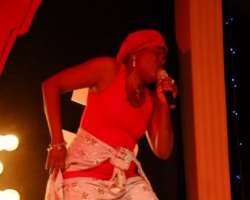 Sequel to the rumour peddled round the city about the purported Jenifa 3 which a lot of Funke Akindele's colleagues have nailed her for, the rave of the moment cross over actress has come out to debunk all the rumours that surround the story saying there is no such idea in mind.
]
“It's not a lie that there is a production going on at the moment which Jenifa is playing a lead role, The Return of Jenifa but the storyline is quite not in any way linked to the chart-buster Jenifa and the cast which are yet to be contacted too are different, so it's rather a another movie from my stable.” She informed.

And on her rift with Mosunmola Filani, one of the beautiful faces who made the film tick, Funke said she was shocked to hear a lot of rumour as regards the selection for the new movie. “The Return of jenifa is totally a different story from the real Jenifa which she was contacted and fully paid to take part in. so, there is no relationship between us that could cause us talking rubbish about the yet to be produced movie.” Funke reacted.

The new flick is slated to be out by December, 2009. We gathered