BETWEEN PROPRIETY AND VENDETTA IN EDO 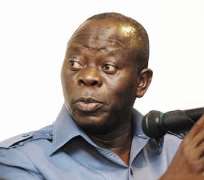 Vendetta or vengeance is not a characteristic of a good leader; forbearance is. In forbearance, there is longsuffering; and, longsuffering abhors extreme dislike and deep-seated hostility in all their ramifications. This is propriety in leadership. In fact, it is the essence of good and mature leadership.

A leader or governor who does not forbear or forgive is a pseudo-manager of people and resources as it is in the case of Edo State Governor, Adams Oshiomhole. It is, indeed, sad when a leader takes precipitate action by shedding the toga of reasonableness and going to the extreme to tyrannize those politically opposed to him.

Such a leader scorns evenhandedness and becomes a little tyrant instead of a philosopher king (even though he claims to be imbued with the gift of competence of logic). This is the context in which one appreciates the recent indecorum that manifested in the demolition of the Benin houses of two prominent opposition party leaders in Edo State: Senator Roland Owie and Dr. Samuel Ogbemudia, both of the Peoples Democratic Party (PDP).

Where was propriety in the callous demolition? Even if there was a modicum of propriety in the actions, there is no way they could be rationalized as proper within the ambit of reasonability vis-à-vis the bitter politics that has become part and parcel of governance and/or statecraft in Edo State.

There is no need to raise posers at this juncture as to whether or not the actions could not have waited for sometime more if the structures had been spared for close to two years before the bulldozers moved in. It is common knowledge that the structures were purportedly saved for two years because Owie was then a staunch leader of the ACN and Ogbemudia was supportive of the Oshiomhole government.

But, as it were, the structure was hurriedly demolished because Owie turned his back on Oshiomhole and the ACN. There are reports that because of the current conciliatory efforts within the PDP and the proclivity towards consensus to present a Benin candidate for the July 14, 2012 governorship election, Oshiomhole’s administration no longer enjoys the support of Ogbemudia, a Benin man and leader of the PDP. One can only imagine the distressing pains in the innermost recesses of Oshiomhole’s heart that Owie jumped ship and Ogbemudia’s support for him is no longer guaranteed. To Owie, the Oshiomhole administration has become rudderless politically-speaking and has landed itself in a situation where winning a second term has become a difficult hurdle to scale.

Now that Owie is no longer in the ACN, an angry Oshiomhole has decided to hunt him and his ilk in a ruthless vendetta mission. The same philosophy was behind the demolition of the two houses belonging to the wife of Ogbemudia, knowing full well that touching the property of the wife of the elder statesman is touching him (Dr. Ogbemudia).

That Owie, former Senate Chief Whip, was a target in Oshiomhole’s voyage of vendetta does not surprise close watchers of political developments in the State. The characteristic disposition of the state governor to ventilate his angst by hitting hard at his opponents is well known to close watchers of Oshiomhole and his politics.

In fact, the executive rascality, which was demonstrated in the wanton demolition of Owie’s property, was not the first assault he (Owie) would receive from Oshiomhole consequent upon his decision to dump the ACN after the chicanery that passed for the party primaries ahead of the April 2011 legislative elections in the State.

Immediately Owie left the CAN in the second week of January this year, it was predictable that Oshiomhole would, within the next few weeks, move against Owie’s son (Dr. Ese Owie, a PhD holder in Law from Oxford University) who was Chair of the State Inland Revenue Board.

Exactly two weeks after, Oshiomhole dissolved the Board and the State was, for obvious political reasons, made to lose the wonderful services of Dr. Owie, a brilliant young man, a technocrat par excellence, under whose leadership, the Internally Generated Revenue (IGR) witnessed a tremendous growth from less than N300 million per month to N1.4 billion in less than a year.

It is indeed unimaginable that an administration which claims to love the State would take actions that would not benefit the State. Dr. Owie’s removal as Chair of the Board of Inland Revenue was counter-productive to the State. In his stead, Oshiomhole appointed his cousin from Edo North, Useni Elamah, as the Revenue boss.

Besides, how could an administration that claims to be people-friendly and masses-caring, for obvious political reasons, embark on a debilitating anti-people mission of demolishing houses: rendering people homeless and creating more housing problem in the State? How many houses has the administration built in a bid to solve the problem of shortage of houses and the rising or high cost of rent?

Where is the place of propriety in Oshiomhole administration’s policy of hiding under the garb of demolishing the so-called illegal structures to hurriedly and indiscriminately pull down structures belonging to opposition leaders in the State without first exhaustively engaging them in discussions over the issue?

But the Oshiomhole administration would not give room for such due process which is the proper thing to do; rather, it was consumed by the passionate pursuit of vendetta against real and perceived political opponents. It is against this backdrop that well-meaning people of Edo State considered the reported suspension of the activities of the “demolition Squad” for alleged indiscriminate demolition of houses as dubious.

This is wicked politics. Does he want to be applauded for suspending the squad when it had already achieved the objective for which it was sent out in the first place? Daughter of Dr. Ogbemudia, Ms. Uyi Ogbemudia (who is a former Commissioner of Education in the State) gave a reaction that exposed the political undertones of the demolition.

According to her, “About two years ago when the governor sent out his destruction squad to demolish some buildings, this property was marked for destruction. We were amazed because this was a property with its site and building plans approved by relevant government agencies.

“When confronted with evidence, the demolition squad apologized to us and acknowledged that they had made a mistake. A week or so later, we came here one morning only to find demolition marks on the wall again. All attempts to explain to the new demolition squad that the buildings were not in violation of any ordinance failed.”

Apparently bemoaning the fate that has befallen her family, she was quoted to have said: “What you see now is the handiwork of Governor Adams Oshiomhole. I say it is his handiwork because when his destruction team came, they said that the governor sent them to demolish property; their exact words were ‘Na Oshiomhole say make we bring them down.’

“Can a man duly elected by the people be associated with this barbaric, sadistic and senseless act? Can this same person who came to be governor through rule of law have such an utter and complete disregard for the law and due process? Lastly, are we still safe in Edo State when the very person who has sworn to uphold our rights is the very one trampling on them?”

There is no doubt that similar anguish and despondency have spread across the homes of the victims of the insensitive executive action. Indeed, his administration may have succeeded in tyrannizing the opponents by demolishing their property, whether rightly or wrongly, the verdict of history will certainly weigh against him sooner than later.

When the time comes, Edo people will recall how Oshiomhole foisted on them a reign of pains characterized by a high tax regime that depleted workers’ spendable and bankable incomes; indiscriminate demolition of houses, thus worsening the housing problem and stores that obliterated their means of livelihood; as well as huge loans running to over N60 billion (the expenditure of which is not commensurate to infrastructure claimed to have been built in the State in the last three years) from the capital market and other sources which have already mortgage (nay demolished or destroyed) the future of the current generations of Edo people and those yet unborn.