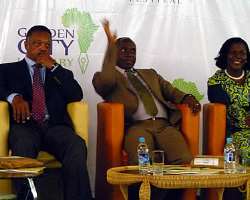 PORT HARCOURT, SEPTEMBER 15, (THEWILL) – Unless Nigerian leaders begin to care for the country and its people and unless there is an emergence of someone who would transcend ethnic pettiness to become the leader of modern Nigeria, the tall dreams of the nation’s earliest heroes will never be realised.

Nigerian literary giant, critic and academic, Professor Chinua Achebe, made the warning yesterday in Port Harcourt, Rivers State, during the official opening of the Garden City Literary festival, organised by the Rainbow Book Club, which began two days earlier. Delivering a speech on Literature and Ethnicity: To What Degree is All Literature shaped by the Cultural Contexts of the Authors? he urged the intellectual class to show the light by basing its action on principle rather than opportunity. Achebe’s keynote address was video-streamed to the audience while his son, Chidi, delivered his paper on his behalf.

“For those who are not proficient in Nigeria’s recent political history, it might be useful to point out that the word ‘ethnic’ was not always ‘the ugly girl that many took to bed at night, but denied during the daytime. My generation remembers a Nigeria that was once a land of great hope and progress, a nation of immense opportunities at its disposal — natural resources, but even more so human resources. Nigeria possesses a great diversity of vibrant peoples who have not always been on the best of terms, but those of us who are old enough remember periods in our history when collaborations across ethnic and religious divides produced great results,” he began.

But the Nigeria-Biafra war changed the course of Nigeria. “One can summarise the conflict as one precipitated by the bile of ethnic hatred. It was such a cataclysmic experience that, for me, it virtually changed the history of Africa and the history of Nigeria. Everything I had known before, all the optimism had to be rethought,” he lamented.

He regretted that Nigerians had, since the war, been subjected to a clique of military and civilian adventurers and a political class that have exploited ethnic divisions in the country. “This group, unfortunately, has been corrupted — spearheading the enormous transfer of the country’s wealth into private bank accounts, a wholesale theft of the national resources needed for all kinds of things — for health, for education, for roads. The result has been that the nation’s infrastructure was left to disintegrate unleashing untold suffering on millions of innocent people.”

The development, he noted, has been helped by Nigerian academics who have presided over the liquidation of the university system and the rise of a culture of anti-intellectualism. “One of the ways we have done it is our obsession for office. Twenty-five years ago, university professors were held in very high esteem. Today, I don’t think anyone thinks very much of them, and quite frankly, I think it is our own making. What happens when a university Vice-Chancellor in Nigeria is about to leave office? You ought to see the trips made up and down to government houses in Abuja, to beg for cabinet positions.”

He urged Nigerians to “stop the nonsense about religion, about tribe, and so on,” organise the country and make it a working entity so that it can fulfil its mission in the world. This task, he observed, is a great deal of work for Nigerian writers: “If the society is healthy, the writer’s job is limited.... On the other hand, if a society is ill, the writer has a responsibility to point it out even if it produces headaches in the halls of power!”

Earlier, chairman of the occasion and former secretary-general of the Commonwealth of Nations, Chief Emeka Anyaoku, implored students at the occasion to work hard to emulate the giant strides of some of the literary icons at the festival. “I recall the sense of pride I felt in 1981, when on my visit to Australia, I found out that Things Fall Apart was one of the set books for students willing to write the equivalent of the General certificate Examination,” he said.

Director of the Festival, Mrs. Koko Kalango, promised to continue to use the instrument of the annual event to inspire young people. “Results have already been trickling in already,” she said. “After attending the 2008 edition of the festival, young Nigerian, Dana Donubare, was motivated to publish his book, Tears of Ogoni, which has won a number of awards, including an Association of Nigerian Authors (ANA) prize. The oratory skill of someone else was identified at a festival by Professor Wole Soyinka, who sponsored him to African and World debate contests where he has won laurels for the country.”

Governor of Rivers State and sponsor of the festival, Rotimi Chibuike Amaechi, promised to institutionalise the event so that it would continue to receive support of the state government beyond his term in office.