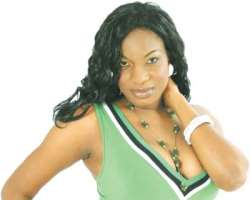 Chika Ike is one of the few ladies in the movie industry that has proven that good character, commendable attitude and humility can still be virtues of a star despite the fame. Quiet, friendly, easygoing are some of the words that best describe, Chika.

Her role in the blockbuster Mirror of Beauty gave the true side of this amazon in the making. She spoke to Reporter, Darlington Abuda, about her career, her family and fantasies.

Which movie gave you your big break?

My first movie was Sweet Love. I did a scene in that movie but the movie that brought me into limelight was something I did, I think in 2004 called Bless the Child in which I played a lead role.

And how has it been since then?

It's been beautiful and I have been working since. It's been interesting and I love it every day.

What challenges are you facing by way of sexual harassment, role denial and all that?

Honestly, I have not faced it and I don't think people face that! I don't know; but personally, I didn't face any sexual harassment whatsoever when I got into the industry. From my own point of view, I got into the industry and God favored me really, because my scene was 'waka pass' (minor role). Then, at one point, I did a sub-lead where I played 10 scenes and went on to play a lead role in Bless the Child. So, it's been gradual for me and I feel I've had favour.

Despite sounding so religious, you act romantic roles. Aren't you averse to it?

No. Most of my roles are romantic and I like it. I can kiss on set of course but that is where it ends. So, when you are playing a romantic role, you have to prove to the audience that you can really play the part so well and you have to make sure you convince them that you are really playing out the character in the movie.

Most of your fans are surprised that all of a sudden you are now married. How did it happen?

It is not about coming into Nollywood this year or yesterday. I think it is more of a mindset. This is what I had wanted for myself and getting married is something I have always wanted. I've wanted to have a family and plan it at an early age; and I thank God I have been able to achieve it.

Is it that you were afraid of the scandals that are associated with being a celebrity?

No. I never thought about that. It's just normal that when you are celebrated people tend to talk about you. It's normal. I didn't go into marriage to prevent scandals, no, never! I got married because I love my husband and I felt it was the right time for me to settle down.

He came to the University of Lagos (UNILAG) for something and that was where we met and that's all I can say about how we met. I prefer to talk about my husband; he is very loving to me, he's an adorable man, I love him more by the day and getting to love him more.

Is there something you would have wished he had, that he doesn't have now?

I'll just say I'm blessed to have married such a caring and understanding man. I don't think I wish for more.

Have you ever been heartbroken before?

Yes, I have. It happened before I got married. You know I'm married now so I can't be discussing such old issues.

Were you in any relationship before you married?

So how did the person feel when you told him you were getting married?

I don't want to talk about that; that's my personal life.

So you broke someone's heart?

I still don't want to talk about that because it's my personal life. Whatever my relationship is, it's my business.

But have you broken a heart before?

It may be unknowingly.

Tell us about this...

I don't want to discuss it too.

How was the Mirror of Beauty experience?

Well, I'd say shooting Mirror of Beauty was a wonderful experience for me and it opened a lot of doors, as it shot me unto the international scene because the movie was shot on 35mm and shown in one of the biggest cinemas in the United Kingdom; Odeon Cinemas and Cineworld and we went there for the premiere. So, I'd say it opened a lot of doors for me internationally. It's a beautiful movie and I'm very proud to say that I've been part of it. When I was shooting that job on set, it was really lovely working with Olu Jacobs, Mike Ezuruonye, Ebele Okaro and the director, Uche Okoh. We all worked like one family and made sure the film came out very well. And thanks to Altantic Overseas for even taking the movie to the international scene and showing it in London.

What extraordinary thing were you told to do?

There was this scene that I had to climb a tree in the movie. It was really scary for me because I had never seen myself climbing trees before. So, they had to lift me up to the tree because I was really scared. I got over the fear when I got up to the tree and was smiling afterwards. That was one of the challenging things I had to do in the movie, but it really made me afraid initially.

How was the pay?

The pay was very good.

How many works do you have to your credit?

Well, over 30 movies and some are not yet out.

And which one is the most challenging?

All my movies are challenging because they all come with their own challenges. You can't really pinpoint that this movie is more tasking than the other. Look at it this way; trying to play a character that is quite different from your own natural character is enough challenge for you, really.

You are beautiful and sexy and we are wondering how you've been coping with men's overtures?

I just have to cope. I don't really have a choice because when you are in the public light, people are going to talk to you and you are going to have so many male fans. But it is left for you to be very diplomatic about how to handle your male fans and, most especially, know when to draw the line with them.

What won't you be caught doing?

I can't be caught doing so many things, especially if it is illegal.

I'm not against smoking and drinking but I don't smoke and I don't drink.

Let us into your background...

I'm Mrs. Chika Ike-Ebireri but popularly known as Chika Ike and in my early 20s. I hail from Anambra State and from a family of six. I'm the fourth child and the third girl. I'm from a Christian background; my mum is an evangelist and my father is a businessman. I attended St. Francis' Catholic Secondary School, Idimu, Lagos. Right now I'm in part three at the University of Lagos (UNILAG) where I'm studying human kinetic and health education. I'm married and I don't take life too seriously.

You are studying physical and health education. What's a sports person doing in acting?

How have you been able to juggle these two tasking careers?

Well, it has been really challenging I must say; but I just thank God for giving me the strength to hold on. I've been able to combine schooling and acting and, recently, I just opened a restaurant and bar. So, it's quite crazy and really challenging.

Are you leaving Nollywood for the hospitality business?

No! I'm not going anywhere. As I said earlier on, I'd learn to cope with the two as they both entail entertaining people and organising events and so I could do the two together.

You have three careers. If you were to leave any, which would you willingly do away with?

I love my acting job and I have always dreamt of going into the hospitality business; that's opening a restaurant and bar which I have done now. I don't think I'd leave any for the other for now because they are all important to me and I'd embrace them and do my best to make sure I succeed in all of them.

Tell us about the restaurant/ bar; what is the name, its location and the services you offer?

It's called Trej Classic or TC. It is located on Akowonjo Road and we do indoor and outdoor catering services. We also organise and plan events. But basically, it's a restaurant and bar. So, you can come in and share some few drinks with your friends and family.

How do you keep yourself beautiful?

It is just my normal routine. I wake up in the morning. I have my bath, pray to God, do my exercise, and drink a lot of water. Basically, that's what I do; nothing extraordinary.

What are your romantic fantasies?

Every young girl has dreams. They are called fantasies because they are far from reality. But it is just normal for a young girl to want to have a Cinderella story, a princess diary and all that.

I've always called myself a princess while growing up and thought of being a princess living in a castle, like Little Mermaid and all. But that's not reality, what I have is.

So, when alone what do you do?

I'm at home relaxing and playing with my dog, Reese. It was a gift from a good friend of mine. I'm in love with dogs.