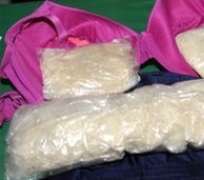 A haul of methamphetamine, seized on the Indonesian island of Bali

The United Nations says the use of synthetic illegal drugs such as ecstasy and methamphetamine has overtaken cocaine and heroin.

A report by the UN Office on Drugs and Crime (UNODC) said amphetamine-type stimulants (ATS) had become the second most widely used illegal substances.

It said data on seizures of tablets and discoveries of clandestine laboratories indicated a worrying growth trend.

Cannabis is still the most widely used drug.
Easy manufacture
The main producers of synthetic drugs remain the Netherlands and Burma, but manufacture has spread to new countries and regions including West Africa and Latin America.

“Affordable and easy to manufacture, ATS are attractive drugs of choice for millions of drug users in all regions of the world and offer criminals a new entry into unexploited and fresh markets,” the UNODC report said.

UNODC report
“Unlike plant-based drugs such as opiates or cocaine, synthetic drugs can be manufactured anywhere with little initial investment required.”

The report says the number of seizures in South-east Asia is indicative of the growing trend.

While 32 million methamphetamine pills were confiscated in 2008, the figure grew to 133 million last year.

“The ATS market has evolved from a cottage-type industry typified by small-scale manufacturing operations to more of a cocaine or heroin-type market ,” UNODC chief Yury Fedotov warned.

“We are seeing manufacturing shifting to new markets and trafficking routes, diversifying into areas previously unaffected by ATS.”

The report also concedes that amphetamine-type stimulants are attractive to users.

“They seem to appeal to the needs of today's societies and have become part of what is perceived to be a modern and dynamic lifestyle,” it said.

“It is also a result of a market potential with continuously high profits and low risks that maintain their attractiveness to criminal groups around the world.”