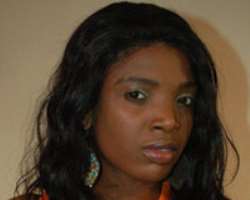 The last time Annie Macaulay talked about her relationship with 2Face Idibia her ex-beau and father to her daughter, it was on a note of finality.

“We have our lives to live. I don't care what he does with his life”, she said.

But all that bravado may have been doused by her recent outburst on the wall of social network twitter where she poured venom on her former friend, one Dr. Ojia.

Ojia, an Abuja based medical practitioner is reported to be the hottest item on 2Face's menu list and our source say, this development has not gone down well with Annie who felt betrayed by her bosom friend.

'Worst human I ve ever met…..Ojia! I don't talk behind people's backz.. I say it as it is! Beware people, of the very confused Doctor!! DEVIL in disguise'.

Ojie who's name has been associated with many prominent names in the entertainment industry is said to have also dated former West African Idol winner Timi Dakolo.

She is allegedly involved in a sizzling affair with the Benue State born super star musician.