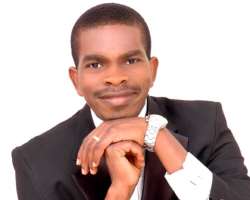 Holy Mallam? Are you from the North?
Holy Mallam is Ajibola Adebayo and I'm from Ogun State. My mother is from Niger State and my wife is from Abia State. I'm a Christian and the third born of my parents.

For how long have you been in the showbiz?
This is my ninth year.

How did you come about the name Holy Mallam?
This is a question that virtually everybody asks me. Holy Mallam is a name I derive from the bible. I started comedy in the church and that is the niche I have been able to carve for myself over the years. I started gospel comedy nine years ago.

Holly Mallam
Initially people did not think it made sense so I had little or no support from anybody; I was just on my own. But gradually, people got to understand that it was a bit dynamic in its own way and unique; where you can not get to say joke that has to do with blasphemy or talking against pastors or against God or the Holy Spirit; you can not make jest of some sacred words or toy with them at all. I actually started it and I try not to speak against God or man.

I don't insult people; I do comedy for matured minds, comedy that is family friendly. The important thing is for people to laugh, so I use my day to day experiences and all of that coupled with how I grew up to make comedy. My comedy could be narrative at times; like a story line or make belief. I also encourage people as well because I remember very well that things were not really good for us at a time and if God could bring me out of that, I think he (God) could use my story through the art of comedy to give others hope.

So what is holy about the Mallam?
I told you that I started in the church and the bible says that we should be holy because God is holy. The bible also says that without holiness, nobody can see God. All these things are what brought about the holy in my name. Talking about the Mallam, when I was starting, I wanted a unique identity and a name that will command attention.

I know there used to be Mallam Audu, Mallam Adamu and all that. Also, when I was growing up, there was a programme they used to do on TV called the Sunny Side of Life on NTA and in that programme, there was a guy called Tunde Soya who would speak like an Hausa person and I liked it, even though I did not know what my future was like. I didn't know I was going to be in the showbiz or entertainment industry or be a public speaker.

As a child growing up I could speak like an Hausa man. I was also able to mimic the other tribes and all of that. Although at that time I didn't know what my destiny was revolving around but I just knew that I could do things like that.
Eventually I joined the church choir where I played the drums and all of that and my friends will tell me from time to time that I can do this. Alarm Blow used to come to my Church then and the Ultimate Mallam too. They said I could do it. One day, they lured me on to the stage and that was my first time ever; that was in year 2000 and that was how I had my first show.

What about your father?
My dad is late, he died seven years ago. He did not really wait to see what his son would become because to be frank, there was no hope anywhere. It was not immediate for me to understand that if God says you're going to be anywhere or be anything, you will be it.

How has life been like growing up without your father?
Life has continued. This may sound strange, but for those who solely believe and trust in their parents to do everything in life for them, I pity them. There was a time in my life that I depended so much on my dad, even before he took ill and I was disappointed many times.

I would think that my dad could do this for me and he would not meet up many times. He tried his best anyway, only that the best was not good enough at the time but he really tried his best. The message I'm trying to pass on is that no man can help any fellow man. Only God that can help you through men because naturally, no man even wants to make any sacrifice for anybody

You said you were a victim of low self esteem, what was responsible for that?
You know, the background you come from can have a lot of effect on people which is why I tell a lot of people not to look down on themselves because if you do not celebrate yourself, nobody will.. You have to carry yourself from within because success and failure come from the heart. What do you have in your heart? If you have big plans, big dreams and big ambitions in your heart, you will become that which you think.

You said it has to do with your background, what is your background like?
When you are born with a silver spoon and gradually the quality of the silver turns to bronze and later it became wooden, it could have negative effect on a young man's confidence. What I am trying to say here is that at a time my parent's economic power dropped and there were crunches so we started going through hard times.

It was not tied to my dad because my dad did his part. He couldn't kill himself to satisfy me and my mom did her part as well. But you know, when you don't have, you have a class of people you mingle with..

There are levels, whether you like it or not. In secondary school, I can recall that for most of my friends back then, I was the errand boy even though we were all age mates. That affected my mentality and my psychology. I did not think I had a say or space to stay among people at the front row because I was always relegated to the background. They will send me here and there, I used to have the lowest pocket money, I used to have the lowest quality of provisions, my clothes and all of that.

How was your academic performance?
I was doing well but I was not better than they were because you know, I have noticed what poverty does to the mind. Rather than think of studying to improve on your marks, you are busy thinking of where your next meal will come from. And that is enough to distract anybody. so I did not really focus well in secondary but somehow, God helped me and I sailed through. It was not as if I was dull, I have always been a bright person, at least according to my mom. I did not know which direction I was going in life at that time but God helped me through my mother who introduced me to USAID where I was giving all the training I needed. I owe my mother a lot.

Which of the jobs you have done gave you the biggest pay cheque?
I have done quite a number of jobs but I don't like mentioning figures. I have done Yar'Adua's daughter's wedding on two occasions. I have been to Aso Rock once and I do corporate events for the oil and gas companies, banks, churches, and all that.

Looking back over the years, do you have any regret being who you are today?
I have no regrets at all. The only one I owe all, is God.
I didn't have a good picture of my future but God helped me with his own given ability, intellect and comedy. I never knew I would be the pioneer of gospel comedy and when I met the people that I met, I deliberately invested in myself by learning from them from a distance, at a close range and it has brought me this far.

If you have a chance to change something in your industry, what will it be?
For me, anything that has to do with being vulgar is irritating.