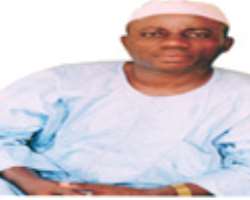 Lati Alagbada, undoubtedly, is among the prominent music marketers in the country. The largely successful marketer, who set the pace in the industry by giving out cars to his artistes, said he came to Lagos in 1972 and by 1975, he had built his first house in Ibadan from the proceeds he made from hawking records in Lagos. He also led our REPORTER, Anthonia Soyingbe, into the world of music marketing and other issues pertaining to him. Excerpts:

At what point did you start marketing songs for artistes?

The first artiste I worked with was Onatar Adewale in 1986. He was then based in Bariga, Lagos. He did a record titled Never you be a Lagos Looker. It was widely accepted and in 1987, Rasheed Ayinde came out with a record titled Money Power from my stable. And people also accepted it. He did another record, which launched me to the limelight and with that I became famous. We made a very huge profit from that record and I bought him a car then, and five months after we released the record I bought him another car. I bought three cars for him because he deserved to be appreciated. I am the first marketer to buy car for an artiste. Some artistes are now singing my praises because I set the pace for other marketers in the industry. In 1994, when I want to release Adewale Ayuba's record, I told him I would give him N400,000, an amount he didn't believe, because other marketers were not fair to these artistes. When I gave him the money he went to America with his band boys and he recorded a very huge success there. The same thing happened between Saheed Osupa and I. I told him I would give him N2 million, and he couldn't believe his ears. I treat my artistes well because we make money from them and so we should encourage them by giving them what they deserve. Today, I am very close to Salawa Abeni because of my first deal with her. When I met her in 1991 I told her that I would give her a certain amount. She replied that she didn't like to borrow and I told her that I wanted to give her. She went ahead to ask me if I wouldn't pick quarrel with her if we were not able to make sales from the record and I told her that God would surprise us. She did a record after Kollington's house got burnt and we made a lot of money from this record and we went to a car mart and she picked a car of her choice. I have good relationship with all my artistes including those that are not under my label any longer. Adewale Ayuba has left me for close to 10 years but he is presently in the studio working and I will market the album. He is coming out with a special album that will shake the industry. I can never cheat my artistes because they work hard to come out with their songs.

Who among the artistes that you had worked with would you say was the greatest?

All my artistes are wonderful and exceptional, because I check their songs before I promote them. I have also worked and I am still working with Barrister (Sikiru Ayinde). The first time I saw Barrister in 1975 when I was hawking, I was crying because I felt so happy seeing him and for over a week I kept on dreaming about this great musician who has brought change to the Nigerian music industry. Today we are like Siamese twins and I enjoy working with him and this is a great honour to me. In 1998 he did a record with me and thereafter he moved to another company but four years ago I called him and asked him if I could still work with him. He told me he charged N12 million for a record and he wanted to release two records at a time. We bargained for a certain amount and we commenced work. To be sincere, there are sometimes you don't make profit at all. Some marketers have tagged me "artiste snatcher' because I treat artistes well and so some artistes prefer dealing with me.

What happens if you don't make profit from an album since you pay your artistes before marketing?

I won't dabble into it if I won't make profit. Before I market an artiste, I will analyse what he is offering me. Besides, you can't make profit always. There are times when you will lose since life itself is not static. If I lose I thank God because he has always been sustaining me.

Do you have any plan of going into movie marketing?

What are those things you consider before you promote an artiste?

Nothing but the quality of the song. I listen to the song over an over again

When will you retire from this business?

I am still young and I have a long way to go in this business.

How did you come about the name Alagbada?

Alagbada happens to be my father's nickname because he distinguished himself wearing Alagbada when his equals could not even afford to buy five yards to sew Buba and trouser. My father would buy 10 yards and sew agbada for every occasion. His surname was actually Lawal but some of my siblings and I have adopted that name because Alagbada is more popular than Lawal. Now people address me as Alhaji Lati Alagbada.

Have you adopted his style of putting on Agbada?

I do that once in a while especially when I am going for important occasion. With the nature of my job I can't afford to put on agabada every now and then. Do you want me to scatter the wares of traders at Idumota with my agabda? They will definitely not take it lightly with me.

You are from Oyo State capital, Ibadan, what brought you to Lagos?

After the death of my father in February 1972, my late brother, Alhaji Rasaq, who then was a military personnel, brought me to Lagos. He was a sergeant in the military and he used to give me N1 every month for my upkeep. I came to Lagos in November 1972 and he got me enrolled in a primary school to continue with my primary education. I told my brother after my primary education that I preferred being a businessman. And so I started selling records under the tutelage of one of my late brothers, Alhaji Saka. Then I envied my brother (Saka) because he was relatively wealthy and he had a bicycle. To me he was the richest man then. I was making a lot of money while working with him such that my military brother sometimes borrowed money from me to refund it after collecting his salary. I hawked around Lagos metropolis like Yaba, Idumota, Ijora and other locations. In 1982 I got a space around Idumota and I was trading there. Before then I had built my first house in 1975, an eight-room apartment in Ibadan. I bought the land for N600. I was quite happy and I was focused. As at the time I built my first house I was still a virgin and I didn't indulge in any form of vices. Most of my friends then clubbed, drank, smoked and womanised but for me I was very focused and principled.

You must have changed your stand now that you are a big man.

No, I don't do that. I am a Muslim and I listen to sermons from the clerics. I once heard a cleric say if anybody indulges in any vice, there will be a gap between such person and God. Since I want to abide by the principles of God, I decided not to create a gap through sin. In as much as I want to be successful in life, I don't want to miss heaven. Today, I am a happy father and grandfather because all my children are doing fine and none of them is involved in any of the vices. My first son, Saheed, is in London but he has some projects here. I have another child who is studying on scholarship in Texas. He was studying at the University of Ibadan before he was given the scholarship. Although I am not well read all my children are well educated and they all make me proud because of their attitude and approach to life. An Islamic cleric who happens to be my friend recently saw me, and he said "God has been so good to you because all your request has been granted." Anytime I wake in the morning I thank my God because my father laid a good foundation and I did the same for my children. I never knew that God would take me to this enviable height in my career but I give praises to his name for his enduring provision.

You always say that you don't indulge in any vice but you have wives. How did you come about the other women?

I have two wives and I am not planning to take more. My religion permits me to take more than a wife if I can balance my love between them. It is better for me to have two wives than messing around with women out there. My first wife is fair and slim while my second wife is robust and dark in complexion. With the two I have all I want and need in women.

You have been in this business from the days of turntable to the days of cassette and now we have compact disc.

I know you want to talk about piracy. Our brothers in Alaba Market have really dealt with us. There was a time I went to Alaba and I saw huge copies of Barister's CD. I was so furious and I destroyed them. But before I knew what was happening they came out in large numbers and someone whispered into my ears that I should find a way out of the premises because those guys could deal with me. I left the arena unhappy because I knew how much I paid Alhaji Barrister and they were reaping from where they didn't sow. The government should wade into this mater because they can help proffer solution to the ugly trend of piracy.