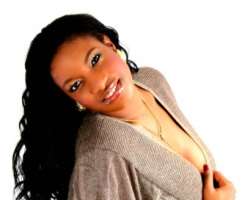 Not many know her as Fancy-Nancy, a nickname she earned when she was only a kid. Her nanny at the time had coined that name as a fitting tribute to her penchant for standing before the mirror for hours on end.

Today, Chika Ike-Ebireri, even though she still chuckles at the nickname, seems glad that she had loved “acting” before the mirror when she was a mere toddler. “I think that was where it all started because I'll paint myself, put on my mum's things and admire what I have done and entertain them in the house. I just loved it,”Chika-Ike recalls.

Everything appeared to be going smoothly until secondary school when she chose Sciences the over the Arts. Ordinarily, that would have signalled the end of Chika's childhood desire to be an entertainer. But right after her secondary education, she became a model, cat-walking her way slowly to stardom.

A few years later, she moved into the movie industry, first as a “wakapass.” But not too long afterwards, the gods must have been pleased with her as within a short period, she became a household name. Now, Chika-Ike, as she is foundly called, has over 50 movies to her credit; among which are Mirrow of Beauty, Blind Couple, Before the Rain, Harvest Of Love, Sister Mary and OC, Tears in Marriage, Miracle Child, and lots more.

The journey to stardom, via the movie industry, for her, like many other actress, wasn't a bed of roses. In fact, her Dad had so vehemently resented the idea of his daughter taking to the screens that at some point, she nearly backed out.

“My father is an Igbo man and you know they are very particularly protective of their female children. Mum was very understanding. Then, Dad was spoken to and he reluctantly allowed me when I became an actress, I think he got to see one of my jobs and today, he is my biggest fan,” she recalls with relish.

Chika-Ike is from Umuchiana in Anambra State and is the fourth child and third girl in a family of eight. Only in her early 20's, she is currently in her final year at the University of Lagos (unilag) where she studies Human Kinetics and Health Education Already, Chika-Ike is married and we hope you'll enjoy this interview we had with the soft-spoken Fancy Nancy.

I have met with many followers of Nollywood who single you out as one of the few actresses with commendable attributes. Why do you think you are viewed in this light?

Truly, nobody is perfect, because we all have shortcomings. Basically, I think it has to do with the way you carry yourself. Many of my colleagues are equally worthly of emulation today. But speaking for myself, I am a very positive-minded person and very enthusiastic about life. I never underestimate anyone because I see something special in every one I see or meet. I am generally very happy about life and most importantly, very cautious.

A lot of people think you are using marriage to ward off potential suitors. Are you indeed married?

I am truly married. I got married about three years now. I have been in the industry before I got married. Maybe, it's just the way I do my things. I am being me and it has nothing to do with me being married or not.

You are one of the very visible female faces in Nollywood today. How long have you been in the industry?

Thank you. Well, I have been in the industry for a little over four years now.

Many who began acting from the very beginning of the industry are not as popular as you are today. What would you say is the magic?

Basically, I'll first of all say that I am grateful to God Almighty because no matter how hard you work, if God doesn't bless the work of your hand you'll be no where. I think it has everything to do with the grace of God in my life and the favour he has bestowed on me. God has blessed me (and) this I can attest to because many people just like me without even meeting them. It is the blessing of God and yes hardwork.

In the past few years you've appeared in numerous home videos. How many would you say you've shot since you came into the industry?

Fifty! Can you remember the first one?

Of course (smiles). It was entitled Sweet Love. I think I played just a scene there, it was a “wakapass” role but it was an eye-opener because I learnt so much from it. Today, look at where I am.

So, how did that much-desired break come?

I got the contact from a friend and we went to this producer's office where he did an audition for us. After that, he said 'I'll get back to you.' And he finally did, but not for that job. He contracted me four months later but then it was just a role I played. Subsequently, jobs started coming.

Your role in the movie, Mirror of Beauty was described by many as one of your very best. Would you say the role characterised the real you?

No, though in every movie I do, I have a little bit of me in it. It happens to every artiste. There are so many characters in different movies. I just had to play that character the way I did. I needed to put myself into it in order to bring it out, to put life into it. The person I played wasn't me one bit. Sometimes, you may come across a role that may tally with your character. It was very interesting working on the set of Mirror of Beauty and I am grateful I did.

Would you say that was the movie that gave you the big break?

No. Mirror of Beauty came out like two years ago. Bless the Child gave me the break. It was my second lead role in a movie. It was an action movie where I played the role of a heroine. Mirror of Beauty only just pushed me into the international scene, because the movie was shown in seven cinemas in London and there were billboards everywhere, coupled with other advertisement.

Before you came into Nollywood, what were you into?

I was into modeling.

Compared with the movie industry, which is better between acting and your work as a model?

Em… modeling is fun, but I think I prefer my acting job. I could be a model and an actress too. But basically I am enjoying acting. Modeling and acting are different worlds and I think I have come to enjoy my acting career better. It makes me tell a story and people learn from it. I give a voice to characters and it goes everywhere.

Apart from acting, I found out that you also run a restaurant. I learnt that you even cook there?

Whao! (laughs), who told you that? Its true that I have a restaurant, but I don't cook there. I only cook for my husband. I have a cook, a manager and everyone and everything that is needed to make a successful restaurant. I just go there once-a-while to go through things.
Some men say they can't marry actresses because of what they as the “funny” roles they play. Tell me, now did you meet your husband.

Did he know you were an actress before he popped the question?

We met in my school. He never knew I was an actress, so after a couple of days and dates, I told him. He had never really seen any of my jobs then because I just started acting. So when he saw it, he was like 'Oh, really! You are indeed an actress' and then we were really deep in the relationship. He enjoyed the fact that I was one and he knew I was very passionate about my job.

But you'll agree that some of your colleagues still suffer that stigma?

Really? But you'll also agree with me that most of them are getting married. I don't think they are loose. You know, when you are in the public eye, you just get judged by every little thing you do. They have a life of their own, but they get judged wrongly almost all the time.

Do you have kids yet?

Hopefully when I am through with university. I have just a few more weeks to go.

Now how do you manage stardom, especially in school?

I have to lie low and be as humble as I can. When in school, there is no sentiment because I am treated as a student, so I just have no choice. I am entirely a different person in school because I know I have a mission there.

Unlike many Nollywood actresses I don't think I have seen you with a close pal in the industry. Is that to say you don't keep friendly relationships?

I am a very flexible and tolerant person and so can work with anybody. I don't have enemies. I enjoy working with them, but there are some you just have this great bond for. I learn something new from them in different ways. Even the people behind the camera are fun to work with. They bring various ideas to the table.

I am sure you know that most people would find that hard to believe.

Of course, they find it hard to believe, but it's true.

How would you describe being married?

It is a wonderful experience. No marriage is perfect, but the ability to stay strong and hold on to your marriage is whats counts. It's not a bed of roses alright, but it's a great experience to marry your friend, someone you can talk to, that loves you unconditionally, even with your flaws.

But you are always casted for romantic roles. How does your husband take it as an African and Nigerian?

This job requires perfect professionalism. When you are given a role to interpret, you do it and then forget about it. For me to convince viewers that this man in the movie is my husband, I need to kiss or hug him as it is written in the script. My husband doesn't get to watch all those scenes because I am always with the remote control to is forward the scenes. (laughs). We are all humans because when you love and care for someone, you don't want to see another person being intimate with him or her. He will just keep laughing because he knows what I am doing.