The Story Of The Soul Sisters Premiere set for Lagos 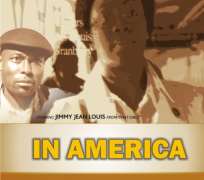 The much awaited Nigerian premiere of Rahman Oladigbolu's award winning film In America: The Story Of The Soul Sisters comes up on Thursday September 8, 2011, at the Genesis Deluxe Cinemas at The Palms in Lekki, Lagos. Popular award winning American actor Jimmy Jean-Louis is Tai Ojo in this movie that has been described as one of the best movies by African filmmakers in the Diaspora. Rahman, a graduate of Quincy College and Harvard University is also the author of On Holy Pilgrimage: A Long Journey for Freedom.

In America: The Story Of The Soul Sisters won the 2011 Annual African Movie Academy Awards (AMAA) for the Best Film for Africans Abroad and the Best Emerging Filmmaker's Award at the 2010 Roxbury International Film Festival in Boston Massachusetts.

“It is a masterpiece that showcases the ignoble sub-culture where illegal immigrants are forced to exist in the US. It chronicles the terrible and dishonorable lifestyle that these individuals live on a daily basis just to survive in the West. Added to this desperation is the incessant plea for financial assistance from families in the homeland. Not since Kafka has someone so aptly captured the depths and essence of Western existentialism and its culture of individualism.”

An African medical student seeking better professional opportunity in the United States finds herself caught up in the American immigration war. With the political heat mounting on illegal immigrants, she's faced only with a dilemma: she either continues to live on the fringes of the society, where there's no hope for her career goal, or give up all hope on the American dream.

A young American puts her life on hold to restore the glory of her parents estranged marriage. After years of painful sacrifice, and amid the storm of her adolescent crises, she has to make a last shot for their reconciliation, or give up forever on her parents as she goes away to college.

What happens when the lives of these two young women cross? The result is a soul-touching friendship that tests the limits of political laws and redefines human dedication.

Rahman was born in Oyo State, Nigeria, into the royal family of the kingdom once known as Oyo Empire. He started his formal education at Alaafia Nursery and Primary school at Ibadan, completed his primary education at Saint Andrews Demonstration, Oyo, and his secondary education at Olivet Baptist High School, also at Oyo. Then he made a decision to come to the United States to study film production. But as a thinker says, events sometimes mock at human foresight, and there is nothing more certain than the unforeseen. A peculiar unforeseen would be Rahman's lot for the next decade after his decision, and which culminated in his first book, On Holy Pilgrimage: A Long Journey For Freedom. Though Rahman decided to write the book to tell his story, to awaken the world about the depth of the mysteries within which life is cocooned, the book initially served only as a therapeutic avenue for him to keep his sanity while going through one of the worst experiences any human could be subjected to. With his body tortured by a mysterious illness, and his intellect by the conflict of cultures, Western scientific and traditional African cultures, his primary motivation to write the book was his discovery of the concept of reincarnation, a complex reality without which he thinks higher understanding of life might be impossible. Confused in his world, living 'on the lip of insanity, not knowing the reason he was made to suffer, whether by science or witchcraft or fate, Rahman discovered the human mind, the balcony from which both the inside and outside of the universe could be perceived. Spending seven years on the sick bed, this territory became his only realm of work and! play. It would transform the worldview that Rahman had ever known, and put him on the pedestal to a new height, a new way of life. Rahman now lives in Massachusetts. Rahman in glasses with Jimmy Jean-Louis with 2010 AMAA awards.